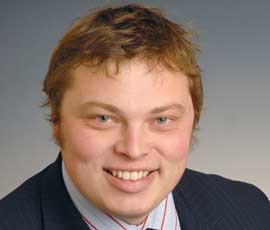 Farm safety campaigner James Chapman, who lost an arm in an agricultural accident, has been awarded an MBE in the Queen’s Birthday Honours List.

Mr Chapman, a former chairman of the National Federation of Young Farmers’ Clubs, has campaigned for better farm safety since his left arm was severed when his clothes became entangled with an unguarded pto shaft in 2005.

An early supporter of the Health and Safety Executive’s Make the Promise campaign, it took more than a year for Mr Chapman to come to terms with the accident and begin thinking positively about how he could use his experience to prevent others suffering.

In his own time, Mr Chapman raises money for the Royal Agricultural Benevolent Institution and the Air Ambulance, which came to his aid. He was named Farmers Weekly Farming Champion of the Year in 2011.

Speaking at the time, he said: “I don’t want people to think I’m preaching. I just want them to learn from my mistakes rather than make their own. I don’t want anybody, their families or their friends to go through this.”

Other Birthday Honours include: