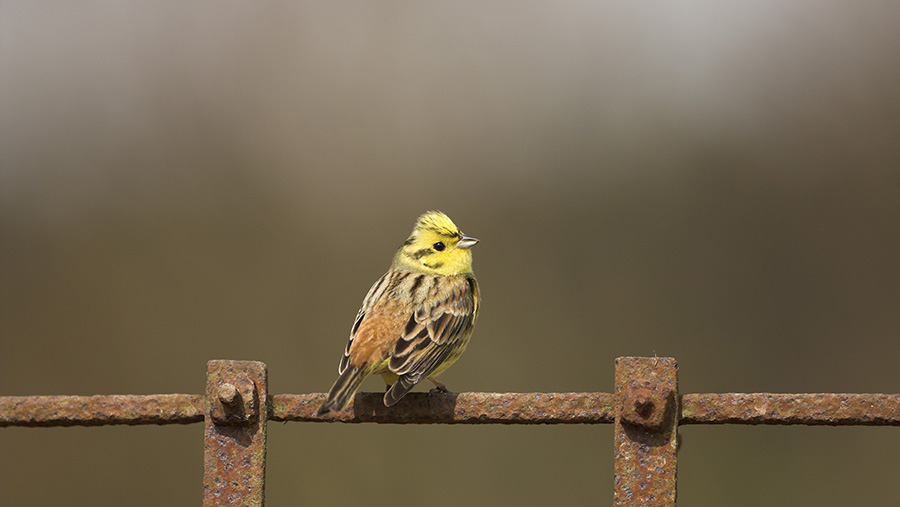 Farming has changed the landscape of the UK and the way wildlife interacts with it massively since the Second World War.

Before the 1940s weeds largely grew uninhibited from hedgerows into crops and hay meadows were in abundance, which created a fantastic habitat for wildlife, but was not so good for food production, says Peter Thompson of the Game and Wildlife Conservation Trust (GWCT).

In the lean decades that followed, food shortages encouraged the intensification of farming, improving yields and maximising the space available for growing.

As a result, says Peter, wildlife lost much of its habitat and bird populations declined.

Tidier farms, for instance, contributed to the fall in the number of house sparrows, with modern buildings tending to be better insulated, with holes sealed up to save energy and yards kept cleaner.

Simple tips for improving bird habitats on the farm

He is explaining such points to a group of about 15 farmers who are visiting Search Farm, a 303ha mainly arable holding in south-west Wiltshire.

Search Farm has been in stewardship schemes of one form or another for more than 20 years, and it’s one of the places that hosts GWCT training courses to spread knowledge and best practice.

Farms were not the only culprit in this shift, explains Peter. Britain became more built-up and the road network grew, which impacted farmland birds’ habitats, as well as providing more food for the animals that predate on them.

Winters were becoming warmer and wetter, upsetting the balance of the food chain.

But much work is being done to reverse declining bird numbers – and it is having an effect, he points out.

“We keep hearing all this bad news about farming, but the farmers I visit across the country are doing fantastic work to improve birds’ habitats.”

He is a believer in targeted interventions that allow conservation to sit alongside economical food production.

At Search Farm, for example, hedges are kept at different heights, and their density varies to accommodate different species.

Tree sparrows have houses on stilts in tall bushes, keeping their young away from predators. Yellowhammers prefer the low dense hedge adjacent to nest.

And, in a copse nearby, a few dead trees have been left to decompose.

“These days, trees are cut down as soon as they die – but a rotting tree can be a better habitat than when it was alive,” Peter explains.

“Leave some lying around.”

Having a better understanding of the birds that populate your farm can help guide the conservation measures worth adopting and which could be dropped.

It’s about making changes based on evidence.

“When you talk about biodiversity, it’s important to realise that we are part of it.”

A good starting point, therefore, is getting to grips with which birds populate your land, and acting accordingly.

“Just get out there with a pair of binoculars,” he says.

“I guarantee you will get a buzz out of it.”

A lot of farmers will, of course, be doing just that, with the annual Big Farmland Bird Count taking place from 6 to 14 February.

It will see farmers spend 30 minutes exploring around 2ha of their land, and reporting their findings – the types of bird and how many.

Last year 1,000 people took part, and Mr Thompson is hoping to beat that total this year.

The idea is to spark interest in birds, plus the data it generates can be used to counter the idea in some people’s minds that farming is bad for wildlife.