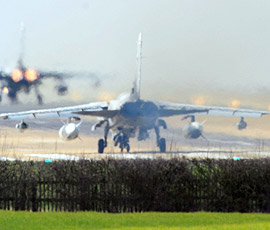 The RAF has issued warnings for two military exercises that will involve low-flying across the Welsh countryside.

Farmers have been given notice that a three month small scale air exercise will be taking place over Wales from the 5 November 2011 – 5 February 2012.

The exercise, code named Pashtun Tempest, will have helicopters and fast jets taking part as part of preparations for operations in Afghanistan.

“There will be occasions when participating aircraft will be required to operate at low level and this may include low level orbits and landing,” said Squadron Leader Albie Fox the RAF’s community relations officer for Wales.

“As always, our pilot’s first priority will be to keep low level flying to the minimum necessary to achieve standards required to operate successfully in the dangerous theatre of Afghanistan. Their second priority is to achieve this with minimum disturbance to those on the ground.”

Army, Navy and RAF helicopters will also conduct a small scale air exercise over Wales from the 27 November 2011 – 4 December 2011.

The exercise, code-named Cobra Strike, will have up to 10 helicopters taking part at a time. The aircraft will be operating in pairs between 0700 – 1630 daily.

This exercise is likely to be centred in South Wales, however, it may be necessary for the aircraft to operate in Mid and North Wales on occasions.