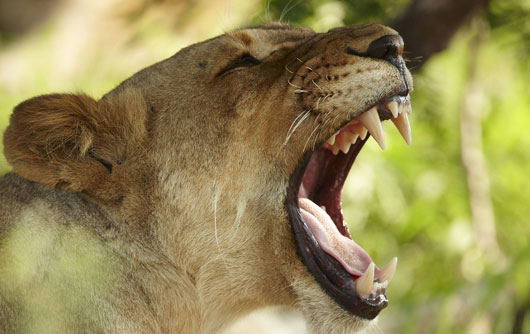 We live within Thetford Forest, the Suffolk side of the Little Ouse river where we farm and run a livery yard and holiday business.

One hot night in July a few years ago about 9.30pm it was only just light and my wife had just slipped out to the dustbin and came in to say the horses were charging about like crazy. The night before we had had a very placid horse crash straight through a fence injuring itself enough to have to call the vet to stitch a cut, very strange.

I grabbed a torch and wandered over to the gate. I have heard the expression about your blood running cold but no further than 20 yards I shone my light straight into the eyes of the biggest cat I have ever seen. It was definitely a good deal bigger than our German Shepherd (thank goodness she wasn’t with me).


It was in the field with about 10 of our customers’ horses. I ran back to the house as fast as my carpet slippers would allow, re-emerging with 12 bore and a pocket full of cartridges.

By the time I reached the gate it was strolling towards the river bank and disappeared. I had to follow although I’m not a great shot at the best of times and out-running it was out of the question. It emerged again about 100 yards further down the river and went into the next field and disappeared into the gloom never to be seen again.

It was dusk as we drove away from the outdoor theatre on the Cornwall cliffs about nine years ago.


Rounding a bend I saw, in the headlights, something big and brown at the side of the road about 70 yards on the left. When we got within 20 yards it sprang across the road in front of us, with its long tail straight up, and disappeared into the bracken. All four of us in the car realised it was a big cat.

Two days later, as an auctioneer at York Auction Market, I was sorting fat lambs and mentioned it to Rob, a farmer. He told me about one night when he was woken by his dog barking. He had horses and, thinking they had escaped, set out on foot to check on them. He jumped over a ditch which had a fringe of tall grass beyond and found himself face to face with a big cat, which snarled and leapt at him, fell in to the ditch and made off. The horses were very agitated but unharmed. He said he kept it to himself as he didn’t want any harm to come to the animal.

Other local farmers said that a couple of years before they thought there was a big cat in the area. They heard it at night and saw its tracks in several places.

Big cats are with us all right and we have joined those who have been lucky enough to encounter them.

About 10 years ago my cousin’s cattle escaped from his farm in the village of Kelby in Lincolnshire. Another local farmer and I were searching for the cattle about two miles away when we came across large prints. We decided to follow them and soon came across a small wooded area which smelt of what can only be described as cat urine – exactly like the smell you get at large cat enclosures at zoos.

We had forgotten about all of this until my son, Jonathan and I were travelling down the A15 south of Sleaford on New Year’s Day. A car travelling towards us, had its lights flashing and we then saw what was in front of it, a large black cat bounding along the road. It then ran straight into the hedge just as we caught a glimpse of its long black tail.

My son and I both stared at each other in disbelief unsure whether what we had seen was real or not. We were in so much shock but we are sure what we saw was a panther. Our only explanation is that some years ago there was a circus in the area. Although the circus has been gone many years, maybe the panther escaped from there?