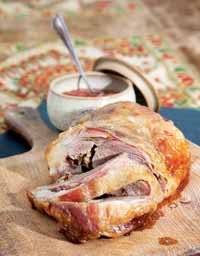 Sitting down to dinner in a local restaurant for my dear friend Angela’s 40th birthday party recently, I was reminded by my fellow diners and “old” Young Farmers about previous recipes from this column that they had cooked.

I don’t think there was lamb on the menu that night and even if there was I would have chosen something else, as we have a good supply at home, courtesy of Mr V. Having said that, it’s just as well I’m doing shoulder of lamb this month, as that’s all he had left in the chiller after good demand for lamb at the New Year’s farmers markets.

For this slow roast I’ve boned out the shoulder, as it provides an ideal cavity for placing the garlic and rosemary stuffing, and if you use a casserole dish that’s just a little bit bigger than the rolled joint you don’t have to tie it up. As an alternative to mint sauce or redcurrant jelly I’m adding a rhubarb salsa, which, being both sweet and sour, cuts through the richness of the lamb.

If you grow your own rhubarb or don’t want to buy the early forced variety, you may want to hold on to this recipe until it comes into season. In case you haven’t made any marmalade yet, or fancy making some more that’s a little bit different and you like the flavour of aniseed, then try this marmalade with star anise. It may sound like a bit of a novelty, but this Chinese spice did appear in some Western recipes for sugars and jams in the 17th century. The marmalade goes very well with a slice of the fruit loaf, which I like to bake on a winter’s day, and especially for Sunday afternoon tea.

A whole shoulder of lamb will feed about six people generously. Cooking for this length of time means the meat will just fall apart and can be cut with a fork. Don’t expect to get nice slices out of this.
1 shoulder of lamb, boned
Salt and freshly ground black pepper
2 large sprigs of rosemary
4-5 cloves of garlic
A small glass of white wine


Peel the garlic and bash the cloves to break them up a bit. Bone the shoulder of lamb or get your butcher to do it for you. Season the inside of the lamb where the bone was removed and stuff in the rosemary and garlic. Roll the lamb up and place it in a deep oven dish just large enough to hold it (it shouldn’t need tying if it fits snugly). Pour the wine into the dish and season the top of the lamb with salt. Cook at 170C (325F, gas mark 3) for one hour and then reduce the temperature to 100C (gas mark ¼). Cover with a piece of tin foil (or a lid if your dish has one) and cook for a further five hours. Remove from the oven and tip all the juices into a jug and skim off any fat. Leave the meat to rest in a warm place for about 20 minutes before carving as best you can into thick slices. The juices can be served as they are but you can also use them to make a proper gravy if you wish.


Slice the onion thinly and crush the garlic. Split and de-seed the chilli and slice thinly. Gently fry the onion, garlic and chilli in the oil until the onions are very soft. Add the honey, sultanas and red wine vinegar and bring to the boil. Cut the rhubarb into thin slices and place it in the pan. Cover with a lid and cook until the rhubarb cooks down. Simmer until thick. 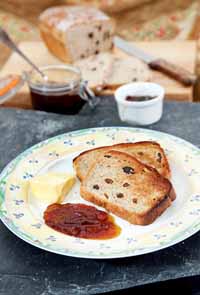 
Warm the water and dissolve in it the yeast with a pinch of the sugar. Warm the flour and make a well in the centre. Melt the butter and put this in the well with the sugar, salt, allspice, fruit and egg. Mix together adding the yeast/water mix as you go. When it has formed a dough, put it in a warm place to prove. When it has doubled in size, knead the dough on a floured surface until smooth. Place it in a suitable tin and put in a warm place to prove again. When it has doubled in bulk, place in a hot oven – 220C (425F, gas mark 7) for 20-30 minutes and brush with a little honey to produce a sticky crust.


Wash the fruit and squeeze the juice. Put the pips into a muslin bag and cut the orange peel into thin strips and place it in the preserving pan with the orange and lemon juice and the water. Put in the bag of pips. Simmer for about two hours until the orange peel is really soft and the liquid is well reduced. The total volume should be about 1.8 litres. Squeeze the muslin bag and remove it. Put in the crushed star anise, add the warmed sugar and bring to the boil. Boil rapidly until setting point is reached. Heat your jars in a low oven and boil the lids to sterilise them. Pot the marmalade and seal with the lids while still hot.