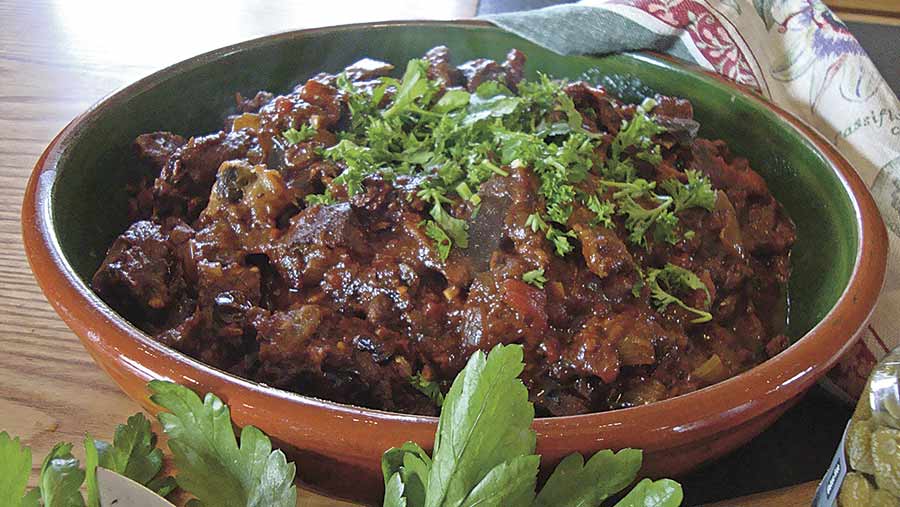 This delicious stew derives from a Greek recipe for lamb (arni kanellas).

I loved it and thought it would work really well with venison. It does. It has a lot of ingredients (unusual for me as most of my recipes have very few). But it’s worth it. Make lots and freeze it.

I never used to be a great fan of cinnamon except with fruit, but it works exceptionally well here, and aubergines are a perfect accompaniment to venison, giving that luscious feel to the meat.

The optional garnish is worth doing; it makes the end result gloriously complex.

½-1 tablespoon ground cinnamon, or to taste

To serve (optional but very good)

2 tablespoons capers, rinsed of their brine

Heat the oven to 180°C (350°F/Gas 4). You may find it easier to cook this in two dishes if your largest casserole is not big enough. The aubergines make it quite bulky.

Remove the aubergine stalks and cut into 4cm/1½ in cubes. Mix with the salt and leave them to drain for half an hour.

Add the raisins to the vinegar in a bowl and leave to steep as well. By the time you have fried everything else, half an hour will have passed.

Dry the venison chunks if they have been defrosted or vacuum packed. I use a clean tea towel or large clean dishcloth for this, as paper towels stick to the meat and in any case they are not good for the environment (rinse the tea towel in cold water before putting it in the washing machine).

Heat some of the oil in your largest heavy pan until very hot, then brown the venison all over, in batches.

Remove the chunks, draining off any oil using a slotted spoon and transfer them to a very large casserole dish.

Reduce the heat to low and add the onion, stirring gently for about 10 minutes until it is soft and transparent. Add the garlic and cook for another minute or so, then add these to the casserole.

Dry the aubergine chunks by squeezing them in another clean tea towel. Rinse out the frying pan, set it over a medium heat, and add more of the olive oil.

Fry the aubergine in batches and add them to the casserole when nicely browned on both sides.

Add the tomatoes and their juices, the honey, coriander, 1 tablespoon of the cinnamon, and the raisins in their vinegar. Season with pepper but not salt at this stage as the aubergines are salty.

Add a cup or two of water, cover, and heat it gently until simmering. Then cook in the oven for an hour. Give it a stir occasionally in case it sticks to the bottom.

After an hour, reduce the heat to 160°C (325°F/Gas 3). There should be enough sauce to remain a little runny at this stage; if it is a bit dry and inclined to stick, add a splash of water.

Season the sauce with salt and pepper, and more cinnamon if you prefer – I usually add another half tablespoon.

Bake for a further 30-40 minutes or until tender, which could mean another hour if the venison is from an older animal.

Chop the parsley, mint, and capers together. Serve the venison on a large warmed serving dish, piled high with the herbs/capers sprinkled on top.

The dish is not meant to be particularly runny, but you can always stir in more water if you like.

Serve it with rice, or with orzo pasta. In both cases don’t overcook it and stir in a small amount of olive oil with some fresh herbs and ground black pepper just before serving.

Or, even better, finely dice a courgette into 1cm (½in) pieces and stir-fry them in very hot butter, and mix this in.

Nichola Fletcher is a venison ambassador, having spent the last 40 years promoting it. In 2014 she was awarded an MBE for services to the venison industry. She has written three books on the subject, as well as including venison in many of her other publications. Her latest one is The Venison Bible, published by Birlinn, at £4.99. To find out more, call 01337 828369 or visit nicholafletcher.com