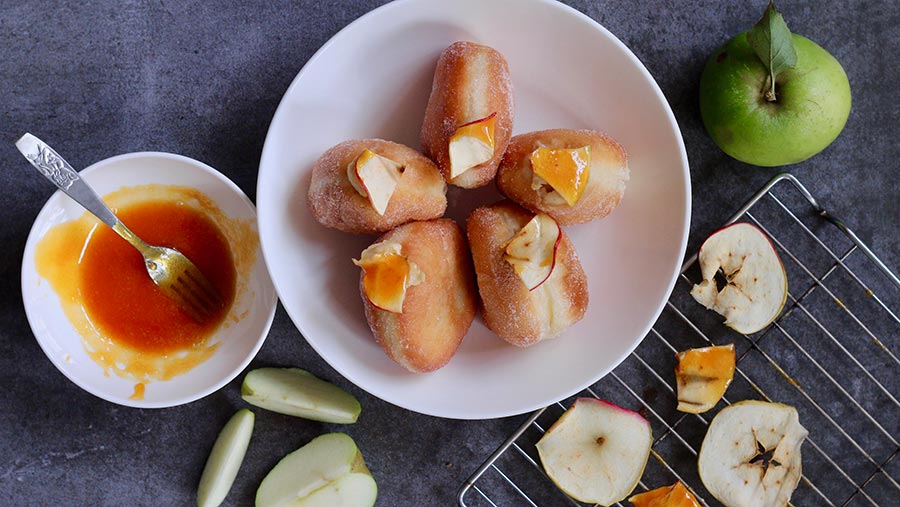 The nights are drawing in, it’s getting colder and wetter. Why not take a break from watching endless episodes of your favourite shows on Netflix and make something utterly delicious instead?

These toffee apple doughnuts are the perfect sweet treats for a chilly, dark evening stood next to a bonfire, staring up at the sky as fireworks burst and fizz around you.

The best bit is they can be served warm or cold and make a fun cooking challenge to take on with the kids.

For the crème pâtissière

For the spiced apple compote 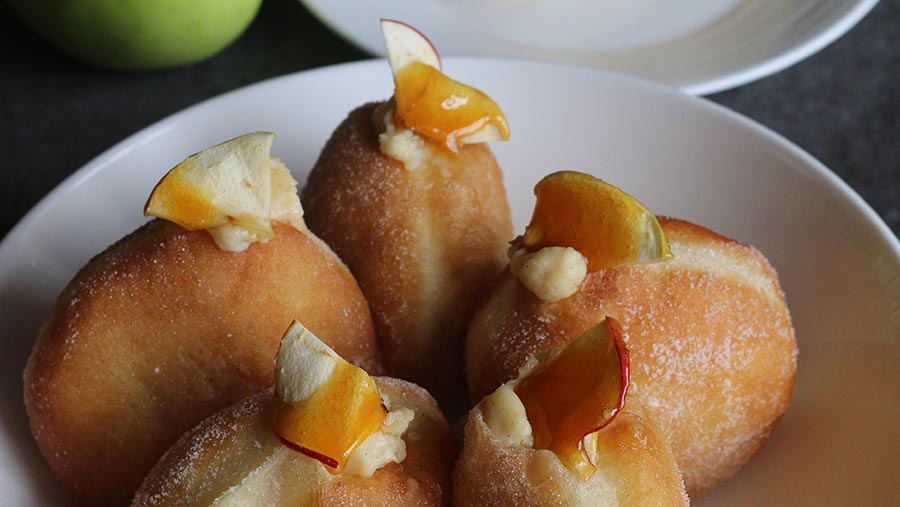 1. Put all the dough ingredients into a large bowl, apart from the oil and half of the water. Mix together until you have a dough, then gradually add the remaining water until all the ingredients are combined.

2. Tip the dough out on to a lightly floured surface and knead for 10 minutes until it is soft and elastic.

3. Put the dough in a clean bowl, cover with clingfilm and leave to rise for an hour or until it has nearly doubled in size. Tip the dough out on to the worktop and knead for five seconds.

4. Divide the dough into 12 pieces (this should work out at about 40g per doughnut) and shape each piece into a ball. Place on a floured baking tray, not touching, and allow to rise for a further hour.

5. While the doughnuts are rising, make the fillings.

6. For the crème pâtissière, pour the milk and vanilla seeds into a heavy-based pan and bring gradually to the boil. Remove from the heat and leave to cool for 30 seconds.

Meanwhile, whisk together the egg yolks and caster sugar in a medium bowl until pale, then whisk in the cornflour and plain flour. Pour the vanilla-infused milk on to the eggs, whisking continuously, then pour back into the pan.

7. Bring back to the boil, whisking continuously over a medium heat and cook for one minute. Pour the crème pâtissière into a bowl. Cover the surface with cling film to prevent a skin from forming and leave to cool. Transfer to the fridge to chill.

8. For the spiced apple compote, add the butter and sugar to the pan. Once melted, add the apple and spices and continue to cook until the apple is soft, but still has bite.

9. For the toffee sauce, add the cream, butter and sugar to a pan. Gradually warm until the sauce is bubbling and has darkened to a toffee colour. Stir in the pinch of salt.

10. Preheat a deep-fat fryer to 180C. Once the fryer is at the right temperature, lower the doughnuts into the oil and cook each side for five minutes until golden brown. Once they are cooked, remove from the fryer, drain on some kitchen paper and set aside to cool. Don’t overcrowd the fryer as this will make the oil temperature drop.

11. Once all the doughnuts have been cooked you can start filling them. Swirl one-third of your spiced apple compote and 1tbsp of your toffee sauce into your crème pâtissière then spoon this into a piping bag.

13. Decorate the doughnut with a slice of dried apple and a drizzle on the remaining toffee sauce. Can be served warm or cold with the remaining compote.

Seasoned is owned by dairy farmer’s wife Clare Major and is in the grounds of the beautiful Catton Hall Estate in Derbyshire.

It operates more than 100 different cookery and baking courses taught by some of the country’s best chefs, some of whom are BBC Masterchef and Great British Bake Off finalists.