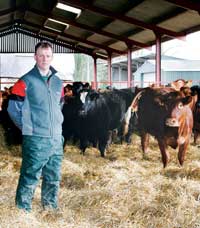 February brought with it some miserable weather so it was a good idea for us to head off to New Zealand for a few weeks. We spent our time travelling the North and South Islands visiting friends and family, as well as fitting in time to visit some of our suppliers.

One of the strongest areas in NZ agriculture must be dairying. Everywhere we went we saw fields full of dairy cows – Kiwi hybrids – Friesians crossed with Jerseys. These animals are a lot smaller than the UK dairy cow. In the North Island, in particular, there was a large acreage of maize being grown for feed.

Costs involved in milk production certainly seem to be lower than the UK. The only buildings on most dairy farms were a roofed milking parlour. The other important requirement was to get water on to the grass. The relations we stayed with in South Canterbury have had a fairly wet end to their summer and they had plenty of grass all over their farm. However, like most dairy farmers they do have a centre point irrigation system on their low ground, but in order to increase their cow numbers they are now looking to irrigate their hill ground too.

In terms of beef production, this was predominantly Hereford and Angus cattle. They are all being finished on grass and so there were not many continental breeds at all. We did manage to see two herds of Limousin cattle during our trip.

Back home and the improved weather during the first week of March has allowed us to spread dung and get some early fertiliser spread on to our winter crops. The cows and in-calf heifers will soon get their annual scour vaccine since calving is due to start at the end of the month.