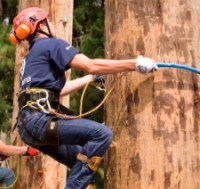 The pole-climbing contest at the Royal Welsh show is one of the most popular events, but installing two new 120ft poles was a ‘logistical nightmare’, according to organisers.

The poles stand in the forestry area of the showground and people compete to see how quickly they can climb them –  a feat of strength, nerve and agility. However, getting them to the showground required all of those qualities too.

The Royal Welsh Agricultural Society asked the army whether it would be possible to fly in the two giant Douglas firs, but this solution was too expensive.

In the end, an operation was mounted in late June using two articulated lorries fitted with the largest timber cranes in Wales. The 36m poles were transported to the site from Brechfa Forest in Carmarthenshire, a 70 mile journey which took 18 hours to complete, but would normally take a lorry no more than two hours.

The poles were finally hoisted in to place using a 90t crane – 17ft of their length being buried underground to give the poles stability. 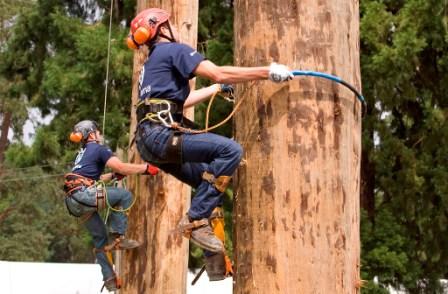