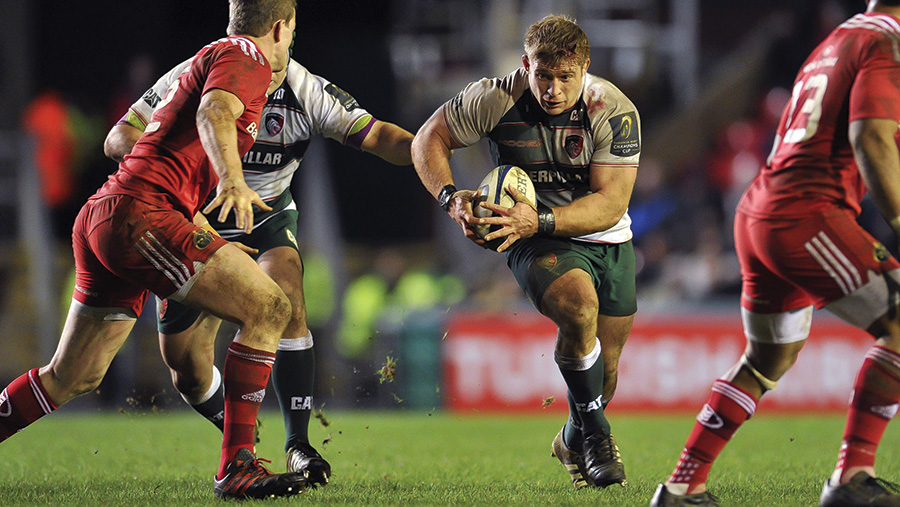 With rugby fever gripping the nation ahead of the Six Nations which begins on 6 February, one star of the sport, Tom Youngs, talks about the game and his farming connections

Tell us about your farming background

My family farm is in Norfolk – it’s 566ha of arable, although we used to have dairy cows and sheep. My dad Nick and uncle William run it. I’m also good friends with a farmer in Leicestershire, so I go there for my farming kicks – sometimes I jump on a tractor, or just have a chat with the farm manager.

What jobs do you most like/dislike on the farm?

I just love being at home on the farm, especially on the tractor. I love doing anything, even the dirty jobs. It’s my peace away from rugby.

What do your rugby mates think about your love of farming?

At first they took the mickey, but I’ve worn them down. Coley [Dan Cole] has done a few days on the farm – we got him helping move irrigators and put him on a subsoiler for a day – he loved it. When we get on buses to travel to matches, all the boys have their magazines and I have a nice fresh Farmers Weekly. I tell them about the technology side of farming – I think they’re quite interested in that.

What is your training regime like right now for the European cup?

On Mondays we do weights and light work outside and review our game as well as the team we’ll be playing that week. Tuesdays, we do more weights and get stuck into each other on the pitch before a massage and physio. Wednesdays, we have off. Thursdays is more weights, power exercises and rugby sessions, and Fridays we jog through the plays before the match the next day.

Field of play… Tom (pictured with dad, Nick) gets back to the farm whenever possible – including for the delivery of their new Sands 4,000-litre Vision sprayer.

I spend about two to three hours a week doing weights and four to five hours of actual rugby, so we don’t spend a huge amount of time doing physical work but when we do it’s flat out. We’re so sore after games that a lot of time is spent on recovery – having physio, ice baths and massages.

Other than skill and physical fitness, what qualities do you need to be a top rugby player?

The biggest one is mental. You see a lot of people in professional sport who have the physical skill and fitness but not the mental side. This is the biggest thing to work on. You’re dealing with the press and you’re constantly being watched – you’ve got to be thick skinned.

What’s it like working day-in, day-out with your brother Ben?

It’s very special to run out together, especially for England or the Lions. I wouldn’t want to work with him on the farm though. He’s a terrible tractor driver, although to be fair to him he’s not really interested in it. But rugby wise, I love working with him.

What are England’s chances in the Six Nations?

What do you hope has been learnt from the World Cup last year?

It’s a hard question. It was so different to other tournaments, just a lot more pressure. We were in a very tough pool and one of us – England, Wales or Australia – had to go out. Could we have done better? Yes, but I don’t know where. It’s a shame, but the country put on a massive show for rugby.

What has been your favourite tour with England and the Lions and why?

The Lions tour to Australia was fantastic and so was the England tour to South Africa. I loved South Africa, it’s a proper hearty rugby nation. The crowd is really on top of you, so it’s a really hostile environment, which brings out the best in some players.

Would you advise your daughter Maisie to go into professional sport or farming?

I will encourage her in whatever she likes. I’m sure the fact that me and my wife Tiff love being in Norfolk will mean Maisie has an element of farming in her. She loves watching cows – we watch a lot on YouTube.

If England had a farm animal mascot what would it be?

My favourite farm animals are cows, so maybe a native breed like a Hereford. We had sheep at home, but God they’re painful.

Describe your dream farm – where would it be and what would you farm?

It would be all arable because I love machinery, or maybe I’d have a beef herd too. It would definitely be in Norfolk – you can’t beat it.

Do you think you’ll go back to farming one day?

I’m so lucky that when I pack my bags in with rugby I’ll head back home to farm in Norfolk. There’s nothing else I would want to do – I’m very lucky to be able to pursue the two great loves of my life.