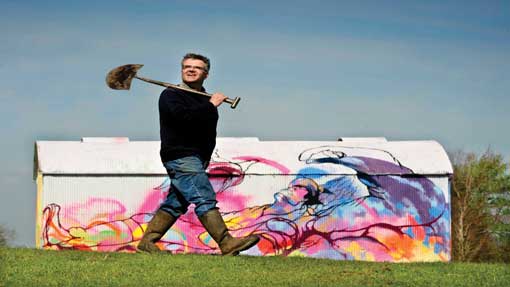 A farmer is taking part in a unique art project in Dumfries and Galloway. Huge murals have appeared on houses, barns and even a disused electricity sub-station as part of the Spring Fling Rural Mural (SFRM) project being run by Spring Fling.

The initiative – led by artists Amy Whiten and Ali Wyllie, managers at the Glasgow-based arts organisation Recoat – got responses from across south west Scotland when it invited people to offer buildings or other items to be painted. Stage one saw the transformation of a pottery, a house, an old sub-station and three agricultural buildings.

Among them is a large corrugated iron hay shed at East Knockbrex Farm near Newton Stewart. Owner Iain Service says: “I have a real sentimental attachment to this barn, it’s been here all my life and I remember stacking the hay in there on hot summer days when I was a boy. But it had reached the end of its life and I was about to knock it down when I heard of Rural Mural.

“I thought this would be a great way to give it a big send off, a real final party. I’ve encouraged the artists to be as bold and bright as they want so the old hayshed can really say something – make a big statement – before it finally goes. It’s also a bit of a local landmark, so I hope it will give drivers a bit of fun when they see it from the road.”

Ian, whose family have farmed in the area since about 1900, says he is not especially artistic himself, but believes there is a strong connection between the arts and the local landscape. “Many artists in Dumfries and Galloway are inspired by the countryside and, as farmers, we are the countryside,” he says.

A team of artists, led by Will Barras from London and local artist Amy Winstanley, worked on the barn and painted it using everything from spray cans to household mops. The scenes they created include ones showing how farming has changed – one shows a horse and rider, another is of a farmer.