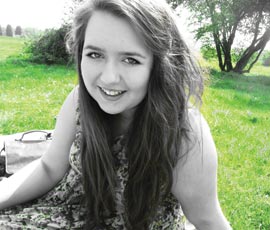 A son or daughter dying on the road is every parent’s worst nightmare. One farming couple living that nightmare share their story and call for law changes to make roads safer.


It was going to be a surprise for her 18th birthday. Her mum and dad, Keith and Jen, had it all worked out – whisk her off to London, take in the sights, do some shopping, see the hit musical. Emily was incredibly excited about what her parents had in store for her to mark the occasion.


But four days before her birthday, Emily died in a car crash. On the day that would have been her 18th, what should have been one of the happiest the family ever had, her parents formally identified her body in a chapel of rest (they were advised not to do it before this time because of the injuries she’d sustained).


“We have bad days and we have horrendous days,” says Keith. “She had her whole life ahead of her.”


Emily had been studying business studies, art and English literature at Kesteven and Grantham Girls’ Grammar School. Her family describe her as “beautiful both inside and out, a very happy, kind and compassionate girl, with an infectious enthusiasm for life”. Emily loved to spend time with family and friends, but also took her studies seriously – she worked hard, was a house captain and a grade-A student.


In fact, one of the reasons Emily hadn’t learned to drive was precisely so she could concentrate on her A-levels. She was determined to get the grades to get to uni and achieve her dream of studying a degree in fashion management. She’d had offers from four unis, but had her heart set on Leeds. As soon as she visited the city, that had been it. Decision made. “Her eyes lit up,” recalls Keith.


“I’ve always loved the business end of farming – aspects like prices and currency – and in some ways that was mine and Emily’s common ground,” he says. “She loved fashion, but had a great business brain.”


Emily was in the passenger seat of a car that was in a collision with a stationary heavy goods vehicle on the slip road of the A1 southbound near Grantham. She was in the vehicle with three friends, travelling to what should have been another ordinary Friday at school. The three other girls survived with minor injuries.


The collision occurred just after 8am on 15 February, less than a mile from the family house at Long Bennington. At the moment it happened, farm manager Keith was at work and Emily’s sister, 14-year-old Harriet, was on her way to school on the bus. Jen was at home getting the couple’s son, 11-year-old James, ready for the day ahead.


Their routine was shattered by a call from one of the other girls in the vehicle informing her there’d been an accident. She immediately jumped in her car and headed to the scene. Amid the many thoughts racing round her head, she kept coming back to one: Why wasn’t it Emily who called?


“The day our life sentence began,” is how Jen describes 15 February. “The senselessness of it is something we can’t – and possibly never will – come to terms with. It’s a death that shouldn’t have happened.”

The Challens are trying their best to channel some of their grief positively by working with the road safety charity Brake. They’ve already raised more than £3,000, and are hugely grateful to the many people who’ve donated this money.


They are supporting Brake’s 2young2die campaign, which is calling for the introduction of a graduated driver licensing (GDL) scheme, which already exists in many countries.


The organisation suggests a 12-month “learner” period and a two-year “novice” period when you can drive independently – but with certain restrictions. They say this would ensure young drivers develop skills and experience on a structured and gradual basis, while less exposed to danger.


“Nationwide, are we equipping our youngsters with the skills they need for today’s motoring?” asks Keith. “At 17, you’re not old enough to vote or drink, but you can go out in a car, which is potentially a killing machine. You think you’re bulletproof at that age – you’re not.”


The couple highlight research showing that a “restricted” system of learning could save 200 lives annually and prevent 14,000 non-fatal injuries, plus save the UK economy £890m through the prevention of costly casualties.


“It will save lives and money and it will prevent other families from having to go through the terrible ordeal that we are now experiencing.”


They are aware, however, that not everyone will back their calls for graduated licences. “I passed my test as soon as I could,” says Keith.


“Life started the moment I got a car. I’d have hated being told I couldn’t drive at that age, but I don’t see the proposal of GDL as robbing young people of their freedom, I see it as making them safer and helping them stay alive. What’s more important than that?”


The Challens are calling on Farmers Weekly readers to write to their MPs asking them to back GDL, to support the National Federation of Young Farmers’ Clubs’ Drive it Home campaign (the couple met at Young Farmers) and are encouraging parents to talk to their teenagers about the risks.


“Every parent is worried when their 17-year-old gets into a car and we had these very fears. We even talked about it. Now our biggest fear has come true and we don’t want others to have to go through that.”


Jen hasn’t gone back to work, but Keith has returned to his job at Belvoir Fruit Farms where he manages 800ha. A distraction, he knows, and while immersing himself in his work offers some sort of comfort, the stark reality is always present.


Farming is the best job in the world, I’ve always loved it and never had a problem getting up and going to work, but some mornings now I lie in bed and think: What’s the point?”


The Challens are a close family, a big family: 16 of them round the table at Christmas. How can they ever, they say, enjoy Christmas again without their daughter?


“It’s not something you ever get over – perhaps you learn to adjust to it, perhaps one day you just learn to manage your grief. From emails we’ve received from other bereaved parents, it seems we have to strive for a new kind of ‘normal’.”


What’s happened has shocked the whole community. The headmaster of Emily’s school, Graham Burks, paid tribute to her: “Emily was one of our house captains, an iconic figure the girls admired and aspired to be like.


She was very bright, very kind, a true leader among our students, a truly beautiful young person. We were all immensely proud of her. She was greatly loved throughout the school community.”


Meanwhile, of all the exchanges Keith had with his daughter, he remembers one now in particular. She was sat in the living room doing an essay, so excited about the prospect of hitting 18, and he’d said, “I wish I was 18 again.”


“And now we haven’t got her anymore,” says Keith. “In addition to what we have lost, there is also the ‘what would have been’. I always said I’d cry for her twice – once at her graduation and once at her wedding. I’ll never get to do either now.”


Jen adds: “As a parent when your child dies, a part of you dies with them. The thought of never seeing, hearing or touching Emily ever again breaks our hearts. It’s mental torture. I’ve lost a daughter but also one of my best friends.”


The couple’s main priority now is looking after James and Harriet. “They are being incredibly brave and are keeping us going,” says Keith.


“I’m dreading our other kids getting to 17. We want to wrap them in cotton wool. If would be fantastic if we could help change the law before Harriet is 17. We’ve got three years to make it happen.”

The National Federation of Young Farmers’ Clubs (NFYFC) is running a campaign to reduce the number of youngsters dying or seriously injured on rural roads.


The initiative is educating members about how to stay safe and change attitudes so everyone can become a better driver.


It includes establishing “champions” who can promote safer practices in their communities and peer groups, plus facilitates training to improve driving skills.

“Everyone in Young Farmers knows someone who has been involved in a collision or been hurt in a car,” says NFYFC chairman Milly Wastie.


“When I was 17 years old, I lost a friend in a rural road incident. It was the first funeral I had ever attended and to be for someone my own age was heartbreaking.


“Most of our members drive on country roads on a daily basis, but for young drivers these roads can be lethal. Many YFCs will have lost members in tragic accidents and statistics show that rural young drivers are 37% more likely to be injured in a road accident than those who live in urban areas.”


The NFYFC is planning to work with the Association of British Insurers on communicating the positive effects of GDLs. “In other countries that operate the scheme, the positive impact has lowered serious injuries and road deaths dramatically, as well as reducing insurance premiums by as much as 20%,” says Milly.

Farmers Weekly is the official media partner of the Drive it Home campaign. If you’re a YFC member, you can also find out what your club can do to support the campaign