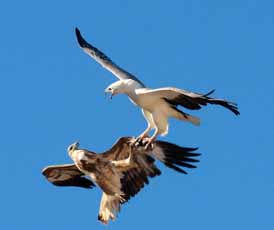 An £80,000 project to protect sea eagles in Scotland is expected to be up and running by early summer.

The scheme will see conservationists from Scottish Natural Heritage (SNH) working with farmers and crofters to help the rare birds throughout their breeding areas, as chicks prepare to leave the nest.

Re-introduced on the Isle of Rum 36 years ago, there are just 52 adult breeding pairs of sea eagles in Scotland. Female birds lay up to three eggs each in March, with chicks leaving the nest in late July or August.

Farmers and crofters will help to conserve and protect the birds, which are also being promoted for their tourism potential. An advisory panel is being set up to guide SNH on the key priorities.