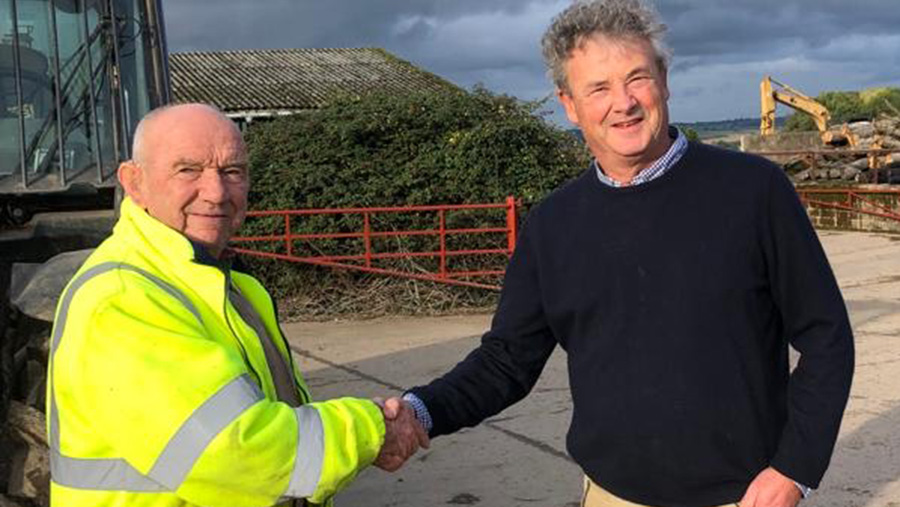 A farmworker will this week celebrate his 86th birthday and 60 years of employment on the same arable farm in Shropshire.

Peter Davies joined Harnage Estates, near Cressage village, on 4 November 1961 – and he still cycles from his cottage to work on the farm four days a week.

In a job spanning six decades, Mr Davies has carted grain and straw, helped with drilling and combining, repaired gates and fences, and managed the estate’s trees and hedges.

“There’s always plenty of jobs to do. I’m not one that hangs about, I like to be moving all the time.

“The only job I haven’t done on this farm is drive the potato planter,” he told Farmers Weekly.

Born and raised in Stanton, Shropshire, Mr Davies left school at 15 and worked on another local farm for 11 years before joining Harnage Estates at the age of 26.

“I came here and had loads of opportunities to learn new skills. I taught myself to weld and did a lot of tractor work.”

The farm grows wheat, barley, oilseed rape, potatoes, and beans and has a flock of New Zealand Rissington ewes.

Mr Davies said the biggest change he has witnessed in farming is new technology and machinery.

“I spent many a night loading bales just using the tractor and bale sledge. Now they’ve got chasers that pick 16 up at a time and stack them,” he said.

Mr Davies gave up driving grain and straw lorries a decade ago after his eyesight deteriorated, but is still a highly valued member of the estate team.

“I’m still loading the straw, it’s a nice feeling to put a good load on and to hear the lorry driver say ‘that’s a nice, straight load,’” he said.

He will celebrate his 86th birthday on Sunday 7 November with his two daughters, Annie and Linda, his son David, and wife Jean, who he has been married to for 62 years.

Mr Davies has no plans to retire, but the couple enjoy regular holidays in their Renault Master that has been converted to a camper van.

Simon Scott, director of Harnage Estates, said: “Peter is a remarkable character who has had a big impact on the success of our farming enterprise.

“He came to work for my father when we bought the farm in 1961. He was involved in the sugar beet when he first joined and then carried on lorry driving most of his career.

“We delivered a lot of straw to mid- Wales and I used to just leave it to him completely. He was very good at organising.”