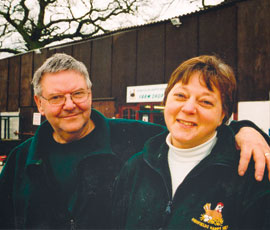 Softly spoken and grandfatherly, Roger Hosking doesn’t strike you as a man with an MBE on the mantelpiece. But this egg producer has recently received one of the highest honours in the land – and it’s not for his poultry enterprise.

Roger founded and runs Highfields Happy Hens with his wife Beryl. A 26,000-bird free-range egg farm in Derbyshire, the farm takes in about 30 students a week from local schools – pupils who have been expelled, or been in other trouble. The Hoskings aim to turn their lives around by letting them work with chickens.

“Angry hands become gentle hands,” Mr Hosking told Poultry World on a recent visit. “That goes into everything we do and is obviously very important for egg collecting.”

Mr Hosking has been hosting troubled teenagers on his farm since 1984, acquiring his first poultry five years later. “Our next door neighbour got 5,000 free-range hens and asked me if I’d like a job egg collecting,” Mr Hosking recalled. “I said I would and the youngsters that were with me came, too. It was just spectacular.”

Mr Hosking’s passion for helping young people comes from his own difficulties growing up, related to the break-up of his family when he was five. “My Dad got sent a letter from my headmaster when I was fifteen that said ‘society needs to be protected from people like Roger’. I wasn’t a bad kid, but I was hurting.

“You’ve only got to look at this country today to see that there are thousands of angry teenagers, just like I was. It sounds a bit soppy, but all they need is love.”

In 2001 Mr Hosking started the National Care Farming Initiative which aims to help people by involving them in farming. Currently it helps young offenders, people with autism, those recovering from addictions and people with mental health problems (see box).

On farm at Highfields Happy Hens students are involved in collecting, grading and packing eggs and, thanks to a recent expansion, they now can work in a canteen and farm shop on the premises.

“There is a lot of education in all that. Now that we’ve opened a shop and a tea room, we’ve got grading, packing, stamping, customer contact, handling money,” Mr Hosking said. “It’s all a tremendously uplifting experience for people who hate themselves.” 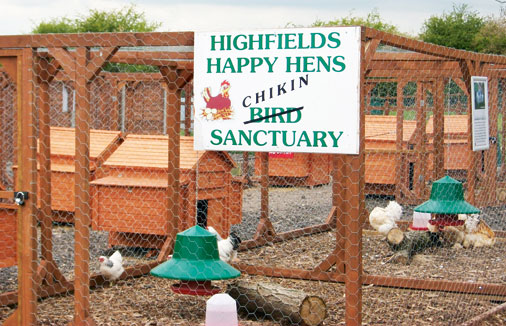 The operation is a charity and, despite their best efforts, doesn’t turn a profit. “I try to make it pay, but we have a phenomenally high level of staff for a 26,000-bird free-range egg farm.”

For Mr Hosking, though, it’s not about the money. His goal is to improve the lives of his students and hopefully convince more farmers, especially egg producers, that working with the Care Farming initiative can be a rewarding experience.

“What we do here is amazing. The country needs to know that almost every social problem can be solved on a farm. The big society that David Cameron talks about already exists here, and it’s going to cost him absolutely nothing.”

Mr Hosking is well-regarded within government, with DEFRA secretary Caroline Spelman naming Highfields Happy Hens in her address to the recent NFU conference in Birmingham.

The MBE, which he received in the New Year’s honours, is another recognition of the excellent work of Highfields Happy Hens.

“When I first opened the letter I felt shock, horror, embarrassment, I thought it was a joke, It just didn’t register at all that it could be real,” Mr Hosking said. “For two days I was stood in front of a television camera, or on the phone, for hour-long interviews. But I knew it was good.”

Having recently completed treatment for cancer, Mr Hosking says he understands his own mortality better and is looking into securing the financial future of Highfields Happy Hens for when he is no longer around.

“The future does worry me a bit; I’m 68 and you don’t live forever. If I can get Happy Hens financially viable then it can carry on.”

Highfields Happy Hens is looking for sponsors to help finish paying for the construction of a wind turbine on the farm which would reduce their £20,000 electricity bill and provide income into the future.

Farmers provide a structured programme of on-farm activities such as animal husbandry, crop and vegetable production or woodland management.

In Holland there are 800 Care Farms which operate as an unfunded part of the social welfare system.

Across the UK there are an estimated 40 Care Farms offering their services to vulnerable people in the community.