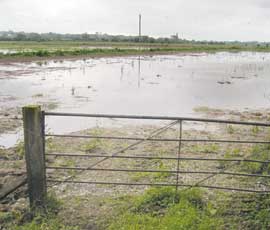 Farmers on the Somerset Levels are considering a legal challenge against the Environment Agency, after flooding devastated crops and fragile ecosystems.

Heavy rain in April resulted in widespread flooding, which soon became stagnant in hot weather. Although the Environment Agency pumped off as much water as it could, it had to stop due to concerns about the effect on river ecology and fish health.

By early June about 500ha was left barren, with around 60 farmers left without spring grass and summer grazing.

However, last week’s torrential downpours resulted in further flooding, and continued high water levels meant some farmers may not be able to reseed pasture at all this year.

“We’ve lost 60ha – it is just barren and dead,” said James Pine, who milks 300 cows at Meare Green Farm, Stoke St Gregory. With the drainage ditches still full, he did not expect to be able to travel on the land for some time yet. “I’m doubtful we’ll be able to put in any seed this year, so that could be two years’ loss.”

He was also forced to house his cattle, and sell his beef youngstock as stores instead of finishing them at a higher value. The initial cost of reseeding and buying in one year’s worth of forage would be about £865/ha.

Although the EA claimed the summer flooding was a once in 100-year event, it had already happened twice this year and again 15 years ago, he added, blaming it on the refusal to dredge rivers or spread water over a wider area.

“This is not a natural event – it is a man-made intervention by the EA. Another 6,000 houses are planned at Taunton, and the EA is just using us as a free reservoir to save Bridgwater and Taunton from flooding, without consent or compensation. That just cannot be right.”

David George, a spokesman for the NFU, said the union was consulting with solicitors about a possible judicial review of the EA’s actions.

However, the EA was unaware of any impending legal action, and was still pumping water off the moors, said spokesman Paul Gainey. “We have shifted about 11 million cu m and have only stopped pumping when there’s been a risk of pollution.”

However, the EA’s John Rowlands said the agency was not responsible for dredging the river or the drainage ditches. “Ultimately, the responsibility rests with the landowner – we’re under no obligation to do any work whatsoever.

“The side ditches are in a fairly poor condition but we are continuing to pump water off farmers’ land at no cost to them.