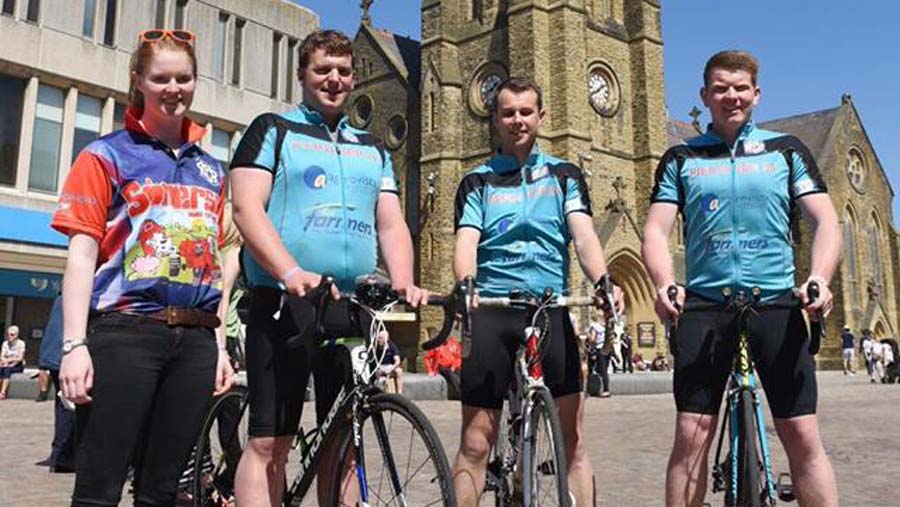 Three members of Somerset Young Farmers earned the right to celebrate in Blackpool this weekend after cycling more than 230 miles to this year’s NFYFC Annual Convention, raising money for charity, in the process.

Ben Druitt from Bridgwater YFC, plus Tom Pope and Joshua Fincham, from Ilminster YFC, left the Weston-super-Mare pier in the early hours of Thursday morning (3 May), supported by fellow young farmer Pip Cusack.

Setting off at 6.15am, the team cycled for 20 hours and 15 minutes before arriving at Blackpool pier at 2.30am on Friday (4 May), allowing a few hours to sleep, before the weekend festivities got under way at the Winter Gardens.

The young farmers have raised more than £2,000 so far, with the money being split between the Royal Agricultural Benevolent Institution (Rabi) and St Margaret’s Hospice.

As tiring as the epic journey was, Ben says it was a unique way to travel to the convention and a great method of raising money.

“Josh has done a lot of long-distance cycling in the past, so that’s where we got the inspiration. The response from people has been excellent and we’ve managed to raise a significant amount of money for charity, which is great,” he added.

You still have time to donate to the team’s fundraising page and support their efforts.