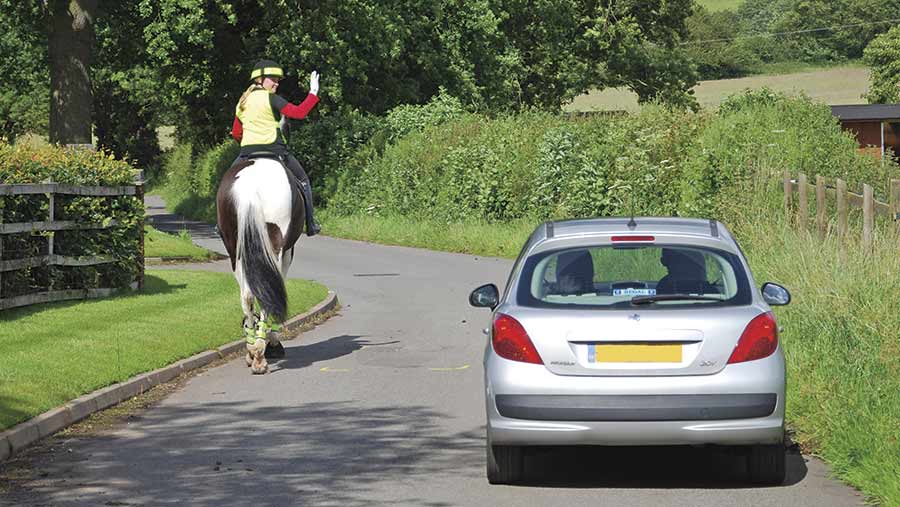 Shocking statistics reveal the threat that horse riders face on Britain’s roads, so Farmers Weekly asked The British Horse Society (BHS) what riders and drivers can do to improve their safety.

Since the launch of its Horse Accidents website in 2010, more than 2,300 incidents involving horses on the roads have been reported to the BHS.

Of these, tragically 38 riders have died and 213 resulted in the death or euthanasia of the horse.

This is just the number of incidents reported to the BHS, too, so in reality the numbers are probably much higher.

The majority of incidents happened because the vehicle involved did not allow enough space between them and the horse.

It was evident that some people didn’t know how to pass a horse safely and there was no clear guidance available.

This was why the BHS launched its road safety campaign, Dead or Dead Slow, to educate drivers on how to pass horses safely.

It included an educational video demonstrating how to safely pass a horse on the road.

Incidents reported to BHS in 12 months to February 2017

Dead Slow calls on drivers to slow down to a maximum of 15mph when they see a horse on the road, to leave at least a car width between their vehicle and the horse, and to drive away smoothly, without sounding the horn or revving their engine.

The relationship between rider and driver can be fraught sometimes; almost one in four of the riders who reported incidents were subject to road rage.

Unless you’ve been on the back of a horse, it can be difficult to understand how vulnerable you are. Horses are flight animals and even a well-trained horse can act on its natural instincts; this may mean quickly trying to avoid a perceived threat.

In order for drivers to respect horse and rider, an aspect of the campaign is educating road users on horses’ behaviour. It’s important for drivers to remember there are three brains working when a car meets a ridden horse: the rider’s, the driver’s and the horse’s.

The campaign continues to be a success a year on from its launch but, despite its achievements, last year saw a 16% increase in the number of incidents being reported to the BHS.

In total, 385 incidents were reported. Of these, two riders and 21 horses died.

The BHS believes that this increase is partly due to riders being aware of the Horse Accidents website.

Either way, it’s unacceptable that horses and riders are still dying on our roads.

The focus isn’t just on drivers, it’s a rider’s responsibility to stay safe too, so BHS are educating riders on how to stay safe on the road. Safer riders and safer drivers will minimise the number of incidents.

People often say that you can’t miss a horse on the road. But a dark horse, with a rider wearing dark clothes, can be incredibly difficult to spot. If you can’t be seen on the road, then drivers don’t have enough time to slow down to pass you and your horse safely, risking the life of the horse, rider and driver.

The BHS recommends that, as a minimum, riders wear a hi-vis jacket or tabard, and their horse has leg bands.

While there is no recognised hi-vis standard for horse accessories, riders should ensure that their garments reach BSI standards.

Hi-vis should be worn at all times while riding out, no matter what the weather. In order to be safe and be seen, a mixture of different hi-vis colours will make you more visible.

When a driver passes a rider courteously, it’s important for riders to say thank you where possible. Whether it be a raised hand or a nod of the head, if a driver is thanked for passing safely, then they are more likely to repeat their behaviour next time they see a horse on the road.

Riders can take other steps to minimise risks, such as riding two-abreast when out with younger or inexperienced horse or rider.

Although it might be tempting to take a photo while you’re in the saddle, unless it is an emergency you should never use your phone while riding. Not only does it mean you have less control over the horse, but it also gives a bad impression to other road users.

If a rider experiences a driver passing too fast, too close or is subject to road rage or abuse, they should report it to the police who will investigate. They can also report it to the BHS Horse Accidents website. Reporting incidents allows other riders to stay safe – they can view hotspots near them, and clear statistics on road incidents support the campaign.

If you’ve been involved in an incident while riding your horse, it’s never too late to report it.

To report an incident, or find out more about Dead Slow, visit www.bhs.org.uk.

Tell us what you think

What are your experiences as a rider? Are drivers considerate or reckless? And what steps do you take to ensure your safety when you’re on a horse? Share your views by emailing fwfarmlife@rbi.co.uk