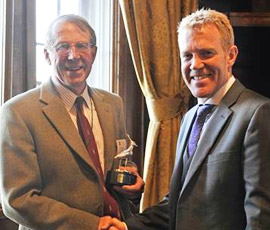 Mr Watts is not only a previous Silver Lapwing winner but also the Farmers Weekly 2009 Countryside Farmer of the Year.

His passion for ornithology has driven a business in bird seed with 140ha of the 760ha arable farm devoted to growing sunflowers, millet, canary seed and naked oats.

He has created numerous bird habitats, from 6 ponds with hedges on their north sides for insect life, three brick towers for barn owls, tree sparrows and kestrels as well as sympathetic watercourse and dyke management.

Through his own research and monitoring he has found that oilseed rapes is the most favoured nesting and feeding crop for birds. These studies have been embraced by the RSPB and are promoted nationally.

Second place for the Silver Lapwing Award this year went to John Fenton, who manages 460ha at Hall Farm, Yokefleet near Goole in East Yorkshire.

Mr Fenton has over the past two decades created a number of valuable habitats in hedgerow planting and management, recreated a salt marsh, surrounds fields with 6m margins and retains the old `warping’ banks built in the 50s to keep water in the fields.

The judges described the number of raptors on their visits as `astonishing’ which included marsh harrier, buzzards and peregrines. Mr Fenton hosts school visits and writes a weekly blog for the school.

He wrote for Crops magazine during the 1990s and was a Farmers Weekly Arable Barometer Farmer.