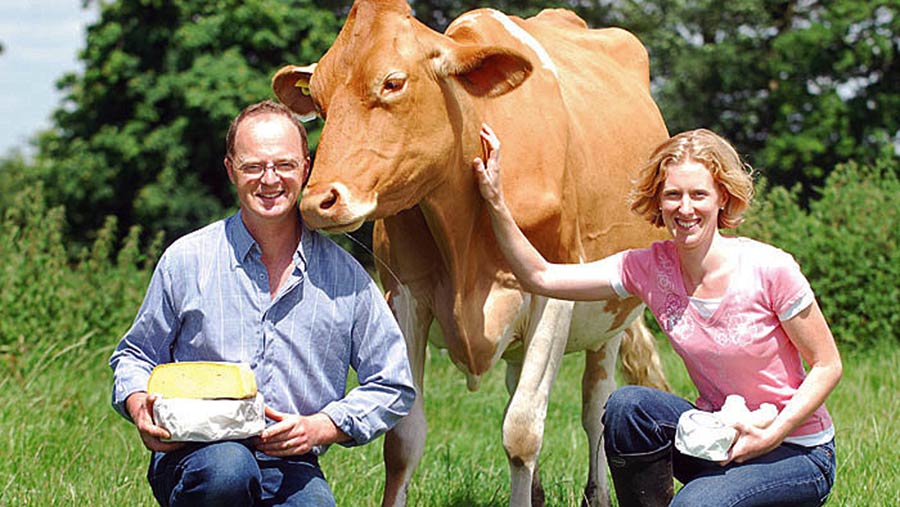 A Suffolk dairy farmer and his family are set to become the new – and only – dairy farmers on a small island in the English Channel, following worldwide search for a new dairy farmer on the island of Sark.

Jason Salisbury and his wife Katharine currently run a herd of pedigree Guernsey cows on Whitegate Farm near Ipswich but will now prepare to move to Sark, just off the north-west coast of France.

The couple have a wealth of experience in producing dairy products as they already make award-winning Suffolk cheeses using milk from their own herd.

See also: So you want to… set up a milk vending machine on farm?

A global hunt for a new dairy farmer was launched earlier this year as the resident dairy farmer was retiring and the island’s 500 residents plus thousands of annual visitors needed a new supply of fresh milk and cream.

Interest in taking up the post came from as far away as the United States, Cyprus and New Zealand.

As the existing dairy farm on Sark needs extensive modernisation, a new state-of-the-art dairy at a new site on the island is planned.

Sark is one of the Channel Islands, measuring just over two square miles, and it relies on tourism and agriculture to support its economy.

It remains one of the only places in the world where cars are banned, there are no paved roads, no street lighting and almost no pollution. More than 50,000 people visit the island each year.

It is anticipated that the new dairy will be in operation by early 2021 when the residents will be able to sample home-produced milk, via a vending machine, and cream. Initial plans will see groundwork started this autumn.

A trust has been set up to project manage the building of the new dairy which will include an education section where the local and visiting children can learn about milk production.

In 2017, the previous dairy farmer Chris Nightingale decided to retire and sold his herd, citing difficulties with land tenure and old equipment.

The dairy will be owned and funded by a trust, which will lease it to the new farmers who will operate as tenants. The Salisbury family plans to import 16 in-calf cows and heifers from Guernsey to Sark in early 2021 to calve around April.

Katharine said: “We will continue to manage our Suffolk farm and cheese making enterprise from Sark and have hired a farm manager from Northern Ireland to look after the daily running of the farm and the existing staff and customers.”

Future plans for the dairy on Sark include the construction of an abattoir to produce meat and a facility to produce cheese. Half of the £400,000 that the trust intends to raise by appeal for the project has already been pledged.