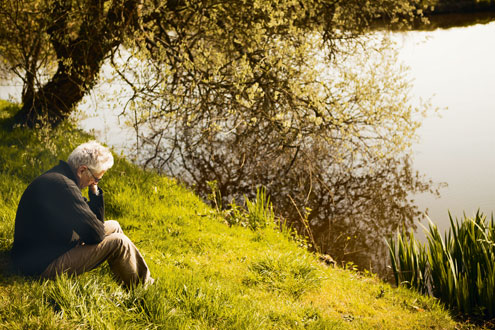 Suicide is one of the last taboos in the agricultural community – it remains a subject that’s skirted around in hushed tones.

Some studies, however, have indicated that farmers may be three times more likely than the average person to take their own life.

Farm Crisis Network (FCN), a voluntary organisation that provides emotional and practical support for the farming community, believes strongly that somebody who is thinking about taking their own life can be helped to change their mind.

“Many wives, mothers, sons and friends notice a change in someone they know well,” says Glyn Evans, a regional director at FCN, who has experience of suicide in his own family. “The temptation is to pretend that you are imagining it and hope things improve.

“It’s really vital that the subject is broached. Asking something such as ‘Are you feeling depressed?’ or ‘Do you feel like life’s not worth living?’ or ‘Have you been having suicidal thoughts?’ really can save lives.

“Because it’s direct, it is a difficult thing to say, but in my experience the feeling that nobody cares enough to notice how someone is, can put people more at risk of going forward to complete suicide. The person can think, ‘Oh well, nobody’s noticed how upset I’ve been, so nobody will miss me’. Talking about feelings is more likely to stop somebody taking their life than it is to encourage them. Anyone worried about another person, or who wants to talk to someone directly, can call FCN’s helpline. The important thing is they talk to someone as it can help.

“The general public’s image of a farmer is somebody who must be happy because they are doing what they love,” adds Glyn.

“They don’t see the loneliness or anxiety about finances and paperwork. They just think farmers are content in what they do out in the fresh air, that they are fit and happy people. And of course many are.”

Glyn believes the changing face of rural communities may also have had an impact.

“We read in our newspapers about village pubs and shops closing,” he says. “That maybe doesn’t bother people if they commute into work in a nearby town, but if these were the only places [in which] you had a chat it can be incredibly isolating to lose them.

“In days gone by, farmers could stop and talk to a few familiar faces about the harvest or how lambing was going; there was an understanding of what would be happening at certain times of year on a farm. Now villages can be full of unfamiliar faces. There isn’t the recognition, interest in or understanding of the local farmer and, as a result, farmers can feel isolated and lonely.”

Even now – in 2012 – many families left after a loved one has taken their own life report feeling a sense of “shame” and this, according to experts, has links back to the days when suicide was a criminal act. It is also tied in with the strong farming notion of pride, of presenting an all-is-rosy front to the outside world. The stigma is still such that many people have stopped using the phrase “commit suicide”, preferring instead to say “died by suicide”.

The government is pumping £1.5m into its new prevention strategy, a move which has been welcomed by the Royal Agricultural Benevolent Institution (RABI), which is often called in to give financial help for farming families left behind by suicide.

RABI spokesman Philippa Spackman told Farmers Weekly: “We hope that some of this money will look at suicide among the farming community. The statistics are very worrying. We know of areas where there have been several farmer suicides in the past year.

“Financial problems are potential causes, but there are significant additional issues. At least two farmers we know of took their lives because the person who used to complete paperwork, such as livestock passports or single farm payment applications, had died or moved away.

“There is also the problem of isolation. Not only do many farmers work very long hours alone, they sadly also have access to means of taking their own life. There is also a mindset that thinks the kindest thing you can do for an animal in distress is to put it out of its misery, a line of thinking that some farmers can equate to their own lives.

“The bureaucracy associated with modern farming can be overwhelming. For many, farming is now also an isolated business.

“Not only do more and more people work long hours alone, but the weekly trip to market where they would once have talked to people who understood their problems is now a thing of the past. Farmers are by nature private people who do not readily share their problems and concerns.”

Consultant liaison psychiatrist Dr Alys Cole-King said at the launch of World Suicide Prevention Day: “Suicidal thoughts start because people feel overwhelmed by their problems or their situation and find it hard to see a way out.

“It’s not that they necessarily want their life to end, it’s just that they cannot cope with their emotional or physical pain any more.

“The underlying reasons are different for each person. Sometimes it may be due to a mental illness or triggered by things like the loss of a relationship, the loss of support, physical illness, financial worries, appearing in court or the death of a loved one. All these are types of event that any of us can (and do) experience during our lives. However, no matter how desperate you feel, if you know where to get help and how to get help, you can get through the crisis.”

Professor Stephen Platt, professor of Health Policy Research at the University of Edinburgh, says men are over three times as likely to complete – this is the medical profession’s preferred term rather than “commit” – suicide as women.

“The middle years, from your mid-thirties to your mid-fifties are those with the highest suicide rates,” adds Stephen.

According to the Office for National Statistics, each year in the UK twice as many people die by suicide than lose their lives in road traffic accidents. Firearms continue to be most often used in the suicide of farmers, followed by hanging and then poisons.

Michael Wilbur, project manager of Suicide Awareness Partnership Training (SAPT), became involved in the subject when the local authority he works for – the Rural Community Council of Leicestershire & Rutland – received a grant from DEFRA in the wake of the foot-and-mouth crisis.

“Suicide is still a taboo subject, but hopefully we have got a lot more people talking about it,” says Michael. “When we first started, people’s reactions about suicide were pretty hostile; with comments such as ‘They’ve got to be a nutter’. Words such as ‘cowardly’ and ‘selfish’ were also used a lot. Our mindset is that people are less likely to try and get help if they think they will be labelled in this way.

“Suicide is not a sign of weakness or anything to be ashamed about. It happens.”

The internet’s not for everyone, but it does offer useful information and advice – and some people do find comfort online.

So Twitter users might be interested to know that there’ll be a two-hour discussion on the subject of mental health issues in the countryside on the social media website between 8pm and 10pm on Thursday 18 October.

It’s one of the regular AgriChatUK sessions and will see members of farming families, as well as experts on the subject, taking part.

You can follow it, or pitch in with your own comments and experiences, by going to Twitter and using the hashtag #AgriChatUK

On the FWi Forums

Talk about this topic on the FWi forums.

If someone close to you is showing signs of depression, you can:

If you think someone is having suicidal thoughts, take action immediately. You can:

This advice is from YANA (You Are Not Alone), a project promoting mental health awareness among – and confidential support to – the farming community in Norfolk and Suffolk. The helpline is 0300 323 0400.

If the worst happens

Eric Thwaites, administrator and company secretary of the group Survivors of Bereavement by Suicide (SOBS), says there is often a double blow to families left behind.

“They not only have to deal with their loss; they often have to cope with the fact that people will avoid them,” says Eric.

“Human nature is such that even good friends just don’t know what to say and so avoid any contact. Needless to say, this is the worst thing that can happen. People need friends to talk to after somebody has completed suicide.”

Eric adds that those left behind often feel a mixture of emotions, from anger and blame through to guilt, shame – sometimes relief – and the inevitable “if only”.

“We try to encourage people to attend one of our support groups,” says Eric. “Talking to people who have been through the same loss can be a huge help.”

The farmer who volunteers

Edward Dennison is a dairy and arable farmer from near Thirsk in North Yorkshire.

Six years ago, when the commitments of being a former NFU county chairman lessened, he found a bit of spare time and became a volunteer with Farm Crisis Network.

Rather than using his soft, soothing tones on the telephone, he has more of a sleeves-rolled-up role. Most of the work he has been involved in recently has been with farmers who have got behind with their record-keeping – whether it’s cattle movement records or single farm payment problems.

“Sometimes it can be that the member of the family who ‘did the paperwork’ has died or that something else just crops up and they get behind.

“Growing the crops and caring for the animals is the easy part; it’s the form-filling that catches people out.”

Edward – like most farmers – knows of a few farmers from his immediate locality who took their own lives, although they were not personal friends.

“One was 21 and the other was 42,” he recalls. “If my work with FCN has taught me anything, then it’s the importance of asking for help before a situation gets out of control.

“It’s very rewarding when you can turn up at a farm and help somebody sort through the mess they’ve got into. But sadly we have one or two quite sad and ongoing cases where difficult subjects – such as whether it’s time to retire and leave the industry – need to be broached.”

One of Edward’s personal bugbears is cattle-tagging. Nowadays, if a newborn calf isn’t registered within 27 days it cannot be registered at all and is valueless. “I have seen so many people get into a mess with the tagging regulations,” he says.

“There are always other jobs to do on a farm and it’s so easy for something else to need doing more urgently. Then, before you know where you are, things have spiralled out of control. Thankfully, we now have a direct line with the British Cattle Movement Service (BCMS) and can usually help get a farmer back on the straight and narrow pretty quickly.”