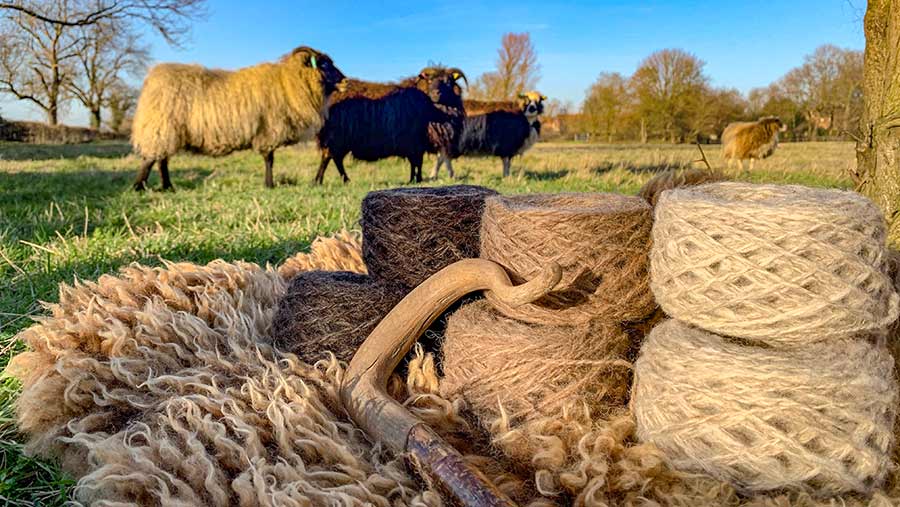 Shepherdess Elizabeth Kneafsey’s ethos is a simple one.

She keeps a small, rare-breed flock to help preserve its heritage, improve habitats and biodiversity, and in honour of her animals’ sacrifice, ensures nothing goes to waste.

Elizabeth, who goes by the name Wild Wool Shepherdess, currently has 70 Icelandic and Shetland crosses – or Shetlandics, as she calls them – near East Bridgford in Nottinghamshire, where they graze around to conserve the land.

See also: “How I went from tractor driver to farm manager of 3,000ha” 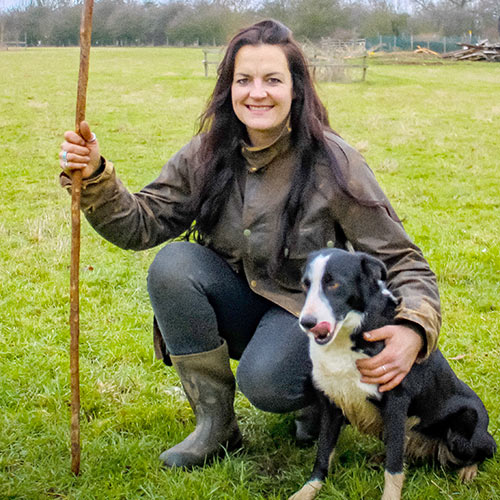 She hand-shears them and transforms their sustainable fleeces into beautiful woollen rugs and has her own small tannery, using natural and organic methods to make sheepskin rugs from their hides, which she sells to customers worldwide.

“I bring these animals into the world, shear them, make rugs and then they go back out into the field and I’ve been selling some good, local, organic hogget too,” says Elizabeth, who also works as a freelance shepherdess.

“I’ve found that, in a lot of cases, people are just so disconnected from their animals, they are just a commodity; there is no real connection.

“I am trying to do things a little differently, by honouring the animals for giving life and taking what’s left and using absolutely everything, including their hide, horns, fat and brains.

“Nothing is wasted; that’s the way we used to live. I’m using traditional techniques used by indigenous tribes, and in doing this I feel so connected to the earth and to nature and that’s what drives me on.”

Although she’s been a shepherdess for the past decade, Elizabeth doesn’t come from a farming background.

She originally trained as a dancer and actress, but after becoming a mum to Harry, now 16, she gave that life up to pursue her passion for the outdoors by completing a wildlife conservation and countryside management course.

One module focusing on lambing struck a real chord with her, and from there she volunteered with, before working for, the Nottinghamshire Wildlife Trust, looking after a flying flock of 600 sheep, which moved around the county grazing at different nature reserves.

A few years later, Elizabeth struck out on her own as an independent contract shepherdess, working around the Yorkshire Dales.

She launched her Wild Wool business four years ago, using the fleeces from the animals she was looking after to create hand-spun yarn and rugs to sell.

She took on her own sheep last year after receiving them in payment for helping establish a small eco-flock in West Sussex.

“My Shetlandics are a very primitive breed of sheep; they’re Viking sheep, used to feeding off volcanic soil and seaweed,” she explains.

“They have a different DNA make-up, so have to be treated differently. 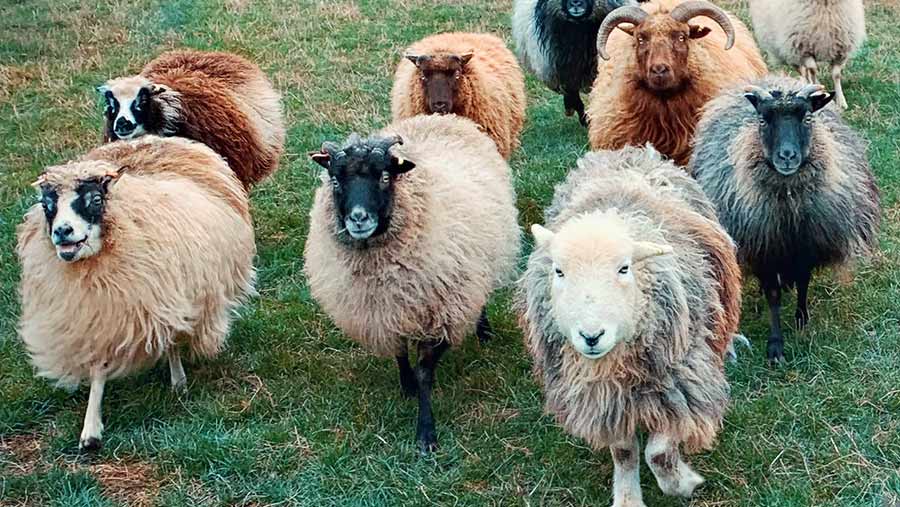 “They’re very hardy and graze more like goats than commercial sheep, and they have different characters too.

“There’s a lead sheep, the matriarch of the flock, and they’re used to being out in the wild, lambing outdoors – I rarely intervene when they’re giving birth.

“They’re double coated too and produce exceptional meat, which is different to your usual lamb.

“It’s slow grown as they go to slaughter from around 18 months to two years, which makes the meat sweeter, richer and more gamey.

“I’m also trying to promote the wool side and create a sustainable-fibre flock.”

Elizabeth doesn’t own any land, but has access to about 12ha, which is rented or made available to her for grazing purposes.

“I graze to conserve the land with wildlife in mind; I’m trying to use my flock’s grazing habits to increase the ecology and biodiversity of the land I have access to.

“The sheep, when continually moved, lock in carbon to the soil.

“They trample in wildflower seed for germination and graze out invasive species of grass and weed, leaving room for the wildflowers to thrive and feed myriad insects, which in turn feed the birds, and so the cycle of life goes on,” she says.

Elizabeth has developed a large following since sharing photos of her surroundings, animals and way of life on social media. 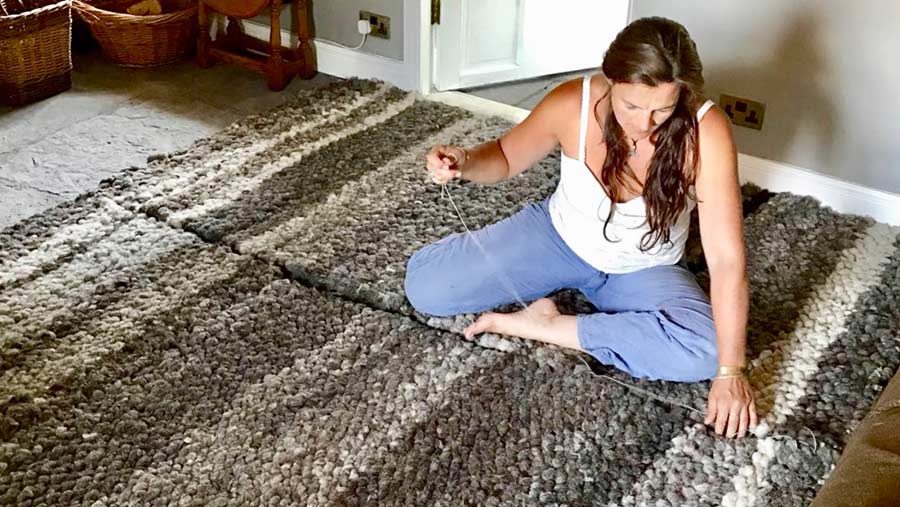 She sells her beautiful rugs, yarns, wool collars and wall hangings – all made in the natural red, amber, copper and silver tones of her flock – through Facebook, Instagram and her website and has customers worldwide in the US, Canada, Norway and Fair Isle.

Her first peg loom rugs were incredibly popular and led to a mammoth commission to create a 27x27m version, which took nine months and had to be made in four separate panels, only stitched together when they reached their new home in Ireland.

In her quest to make sure nothing goes to waste, Elizabeth has also taught herself the ancient art of tanning – using the animal’s own brains rather than chemicals.

She preserves the hide to stop it rotting by salting it or fleshing it – a process that uses a knife to scrape away any tissue, membrane and fat.

It is then tanned using the blended brains, which are absorbed for a couple of days before the hide is stretched across a frame for oiling and then smoking. 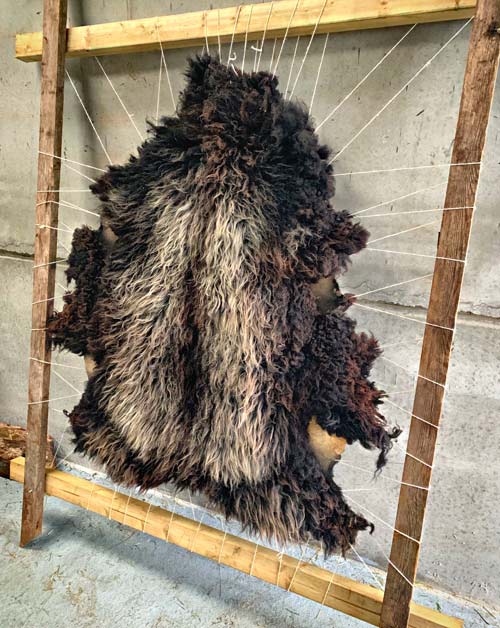 “It’s a very lengthy process, but when you see the finished results, it’s worth it and completely organic,” adds Elizabeth.

“My greatest accomplishment so far is to have tanned a buffalo hide and taken it to the First Nations people of the Mohawk in Canada.

“And by sharing my journey online, I’ve been completely humbled by the interest in what is an ancient and slowly disappearing craft and way of life.”

Eventually, she hopes to see her pieces available in artisan shops.

And for the past year, she has been delivering some workshops and teaching techniques, including the ritual tanning of hides, to help other small businesses and smallholders.

“I just want to encourage people to have a bit more value and respect for what they’re doing with their animals and to be able to make an income from them.

“It’s back-breaking work but I love it as I am connected to the animals and, after all, it’s how we used to live.”