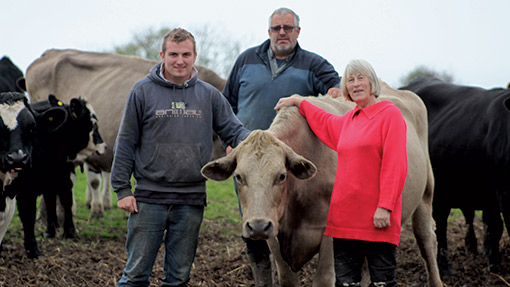 With the UN declaring 2014 the International Year of Family Farming, Farmers Weekly and the Family Farmers’ Association asked readers to pen an essay explaining what the future holds for this cherished group of producers.

Here’s the winning piece from Gill Palmer, as well as some extracts from other entries.

“I’m sorry, Edith, your baby is too small to survive.”


These words were spoken in a cold farmhouse bedroom in the year 1921.


Edith held her tiny premature baby and said: “Hello son, you will survive.”


By the age of six, with his mother’s devotion, Thomas Talling had fought off pneumonia and was well enough to go to school. Thomas was my father.


When the war began, Thomas was working for his father on the family farm. He wasn’t allowed to go and fight because the production of food for the UK was vital. Instead, he joined the Home Guard. He would put in long days on the farm and long nights guarding the Cornish coast or railways.


Then the Land Girls arrived from Lancashire to help with the daily chores. Girls who had no experience had to learn how to milk the cows and work on the threshing machines. Very hard work for city girls. Alice was among them.


Two years later, she married Thomas. They began married life on a small, hilly Cornish farm, working together to make it a success. Soon they moved to a bigger farm.


In the following few years, three daughters were born – I was the middle child. What a wonderful life we had, such freedom to play and roam. I developed a great love for the farm and the beautiful countryside around us.


I was determined that, whatever the future held, if I was lucky enough to have children they and their future generations should have the same freedom I was fortunate to have.


When Dad reached retirement age, he asked me if I would take on the tenancy of the farm. I had two sons, one said he wanted to become a farmer when he was older. After many sleepness nights, I decided I would give it a go.


Dad promised he would advise me, but that he wouldn’t interfere with any decision I made. I don’t know if Dad had a short memory, but every day at crib time (mid-morning coffee break) he would drive down to the farm and issue orders on what would be done that day. I would say: “OK, Dad,” then carry on with the plans I had made.


I found trying to buy cattle at auction very difficult. At that time, female farmers were thin on the ground. The cattle dealers would look at me bidding, smirk, and outbid me.


I asked Dad what I could do about it. He advised me to play them at their own game. Keep bidding for one animal until it’s knocked down to you, even if you pay over the odds for it. Then when a big bunch came into the ring, bid again. Make it look as if you were going to keep bidding.


When the price is high, stop suddenly. When their pockets are hurt, they will leave you alone. Trembling with fear, I took his advice. It worked. The dealer I caught was shocked and very annoyed, but I was then treated with respect.


My next fight was with a farmer who wanted us to load some grain from a small barn with a sucker and blower we had at the time. He drove into the yard and said: “Is the boss about?”


“No,” he replied, “I want the organ grinder not the monkey.”


His grain remained in the barn for a few years – chewed by rats – and will still there when he died. I was getting tougher.


Although I was getting tougher, farming was even more so. Not only had the slump arrived, so had BSE, foot-and-mouth, bluetongue and the dreaded TB. All sent to try us. In Cornwall, we were very fortunate to escape foot-and-mouth, but it was heartbreaking to see the dreadful pictures on television.


It was also very emotional to hear my young grandchildren saying prayers for our cattle as they stroked their noses.


The only good thing at that time was that the public footpaths were closed. For a change, there were no strange dogs chasing the animals.


Now my son, Simon, is taking over from me. His son, Ben, has just finished agricultural college. I feel I can now take a back seat. Just as well, with all European rules and regulations, red tape and paperwork.


What changes, I wonder, will Ben see in his lifetime?


That tiny premature baby grew up to plough with horses, one furrow at a time, one acre a day. Simon uses a big tractor and a turn-over plough, covering 16 acres or more a day. Dad threshed grain with a labour-intensive threshing machine.


Now one man and a combine harvester do it all. Mobile phones, computers, satellite navigation and global positioning for tractors, what else is there to invent?


A few years ago I had the honour to be invited to the House of Lords to receive a “most beautiful farm award”. I know with absolute certainty that Simon and Ben will keep Frogmore as beautiful in the future as it is today.


The future of the family farm is in good hands.

Best of the rest: memorable extracts from runner-up essays

Family farms come in all physical and economic shapes and sizes – from the large estate to the smallholding. The smaller ones, on which at least one family member works in a hands-on way, are at risk of becoming an endangered species if we don’t start to cherish them – and we risk losing them at our peril.


For family farms have moulded our landscape and shaped rural society. Their families hold a wealth of skills and knowledge, without which our nation would struggle to feed itself.


As we face the challenges of climate change, declining biodiversity and fossil fuels, plus uncertainty over global food prices, the role of the family farmer is vital in providing stability in rural society and an economic backbone to the nation.


To achieve our vision, we need to encourage our brightest and most able pupils at school to stay on family farms and take up the satisfying and inspiring challenge of feeding us in the 21st century, while caring for our soils, climate, biodiversity, water and landscapes.


We also need new family farms to be created, with new entrants trained and offered farms and start-up capital, along with mentors from the farming community. As a society, we need to ensure that for those who choose this most demanding and all-consuming profession, we support them by buying our food from them, even when it may sometimes cost a little more.


It is the very nature of the family faming unit that makes it so resilient – how they rely primarily on family members for labour and management.


This gives them a unique competitive edge over the larger farming companies that require strict returns on investment and often have higher costs of production (labour being one of the biggest).


This is not to advocate the use of cheap family labour or suggest that family members should work all hours for little return. On the contrary, a close-knit family team has the inherent flexibility to cope with challenges, riding out the troughs and expanding with the peaks as they come.


The family farm of the future will see a generation of family members who are business-focused, with a high standard of education, good qualifications and technological literacy, combined with the knowledge and skills that have been passed down for generations.


Now would be a good time to get to grips with the legislation needed for an imaginative scheme to encourage landlords, farmers and those buying property in the hills to create secure 60ha farming oportunities for young farmers. This is the optimium size for the economic production of red meat.


Share farming is good because it does away with the vexing issue of rent fixing and instead pays farm income to each party at an agreed ratio, the good and bad years being shared fairly.


It is also good because it greatly reduces the money needed to set up the business. However there is a problem – suppose the landlord wants to sell the farm and the share farmer has spent the best part of their working life improving it.


The farm owner would get the land inflation profit, plus the value of the improved farm; the share farmer might well want to buy it, but the market valuation is too high.


At this point, the share farmer needs a government-backed fund to pay half the cost of buying the farm, the government getting its money back if the farm is sold again.


This measure would provide stability, security and fairness to all parties, and oil the wheels of change.