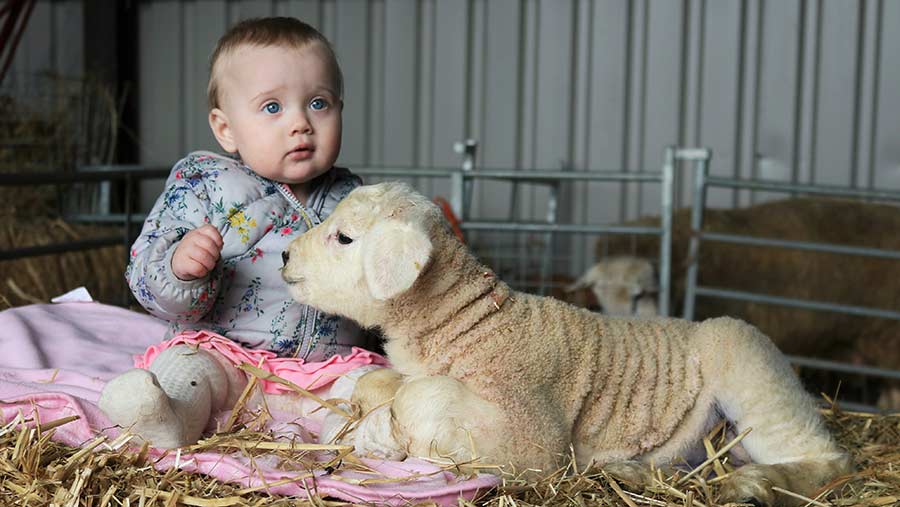 A 11kg Texel born in Wales could mark a new world record for a natural birth.

“It gave me a bit of a shock – it’s the biggest lamb I have ever seen,” said Gerwyn Rees of the 24.3lbs whopper which arrived at Pencelli in Powys.

The ewe was two weeks overdue and, while it took a lot of pulling and three people helping, the ewe didn’t seem stressed and the lamb was “sharp as a button”, according to Mr Rees.

“He looked as if he was three or four weeks old – he actually looked like a Labrador puppy. People can’t believe it – it’s gone mad on Facebook.”

The pedigree ram lamb is part of the Aberyscir flock and Mr Rees and his wife Liz plan to call the new arrival “XXXL”.

Although it’s too late to officially verify the weight, they reckon the lamb – pictured with their eight-month-old granddaughter Esmae – could be a world record for a non-caesarean birth.

“He is by a ram called Caereinion Valiant, which we bought last autumn at the NSA sale in Builth Wells. Thankfully, all his other lambs have been born unaided.

The news follows reports of the arrival of two other “monster” lambs – one weighing 8.5kg and one tipping the scales at 7.7kg.

Have you seen any particularly big lambs this season? Email fwfarmlife@rbi.co.uk