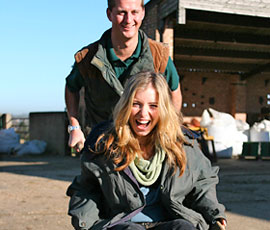 Like many of the best ideas, the Muddy Matches concept was hatched over a quiet drink in a pub. Now, five years after its launch, with 65,000 members and a long procession of weddings, births and long-term relationships to its credit, the dating website of choice for country folk is well and truly established.

It was the brainchild of Lucy and Emma Reeves, sisters who had been brought up in the countryside, but had many single friends in the city who longed to meet rural people. These numerous friends were to come in useful when the project got up and running and foundation members were required.

“You can’t start a dating website without members, so we had to get every single person we knew on board and eventually kicked off in the spring of 2007 with 1,000 members,” she explains. “Farmers Weekly also played a key role, because once the magazine had written an article about us, and a reporter got directly involved by going on a few dates, we boosted membership overnight by 2,000 and that has just kept on building. There was clearly a market there and we just tapped into it.”

Muddy Matches makes no bones about aiming directly at country-minded people and new members are encouraged to take part in a fun quiz to find out were they stand on a “sliding scale of muddiness”. It’s designed as a guide to their townie-country bias.

“We’re very suspicious if new members don’t express an interest in the countryside when they write their profile,” says Lucy. “Most have a bit of townie in their make-up, but they’re usually savvy enough to understand that if they’re dating a farmer they can’t go on holiday during harvest!”

Not everyone stays in touch once they meet their perfect partner, but at the Game Fair last year, Lucy manned the Muddy Matches stand where 30 couples dropped in and introduced themselves as successes of the site.

“We’re very suspicious if new members don’t express an interest in the countryside when they write their profile. Most have a bit of townie in their make-up, but they’re usually savvy enough to understand that if they’re dating a farmer they can’t go on holiday during harvest!”
Lucy Reeves

“We don’t keep tabs on what happens to all our members, but we know for sure that there have been hundreds of weddings resulting from the website in the past five years. The irony, of course, is that if we’re successful we lose our clients, so we need the 2,000 new members who join us every month!”

Despite the growth of the business, Lucy claims one of the strengths of the website is that they take a family approach. People ring and ask advice on which photo to use on their profile and they organise fun events like the annual Mud Lovers Ball. But most importantly of all, they understand their clients, as it’s not so long ago that they were single muddy-townies themselves. 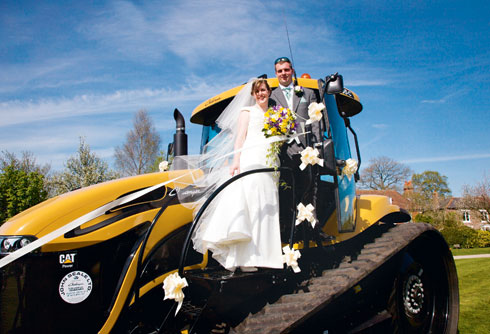 Laura’s story…
When I saw Richard’s profile on Muddy Matches I thought he definitely had potential: he looked and sounded interesting and could become a platonic friend – but I never thought there was a chance of romance, because he’d mistakenly said on the site he was looking to meet other men!

However, I was mainly looking for new pals rather than a long-term partner and have several gay friends who are great fun, so I contacted him. It soon became very clear though that it was a girlfriend he was looking for and we started texting.

He’s an agricultural engineer who fixes tractors, sprayers, combines and everything else and I’m a gamekeeper’s daughter who understands the countryside and now works at an opticians.

I was looking for someone who shared interests rather than a workplace, which is how most of us meet friends these days, and internet dating is great for bringing like-minded people together. It wasn’t until a month after our first contact that we met for a drink at a pub on my side of Hampshire and it was only when I finally set out to meet him at his home that I realised how far away he lived – 45 minutes. We were at opposite ends of the county!

We went out for about 15 months and I think everyone knew we’d end up married. I thought he might ask me at Christmas or New Year and I had gently hinted at the type of ring I liked, but it wasn’t until Valentines Day in 2010 that he organised a weekend away with champagne, chocolates and strawberries all laid on.

He told me to take a nice dress because we were going out for dinner, and then during the meal he started acting strangely and disappeared half way through and took ages to come back! Apparently, he couldn’t decide whether to keep the ring in its box or not and returned to the table via the bar to arrange for a glass of champagne to be served after he proposed!

We got married last April at Richard’s tiny parish church, where the sheep still graze in the graveyard, and used appropriate agricultural transport to get us to the ceremony.

The only casualty in our relationship was my labrador, who was overprotective of me and didn’t like Richard – he would shoulder-barge him and walk between us when we were out walking – so I sent him to the army to train as a bomb dog. Richard definitely won that competition! 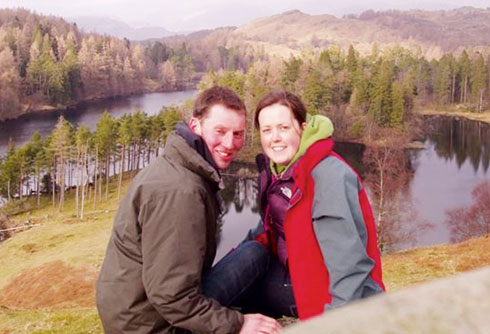 Ian’s story…
I had been a Young Farmer like all my friends, but after that social scene ends it’s hard to meet new people when you’re living in the country and working on a farm all day. Then a couple of years ago a friend suggested Muddy Matches because they’d met someone through the site. I took a look and realised it was a relatively small site and a lot of the members genuinely had shared interests in the countryside or farming. It seemed people were taking the process seriously, too – it wasn’t just a bit of fun – so I decided to give it a go.

I’d only been on the site for a month before I started chatting with Glenys. I was pretty nervous – we both were, I think – but we seemed to have a lot in common so arranged to meet at Penrith and go for a walk across the fell to Ullswater.

It was a route Glenys knew well, and I discovered later that she kept in touch all day with a friend via text because she was out on the fell with a complete stranger! It went really well though, and we arranged to meet again very soon. Ironically, it transpired that she’d been to several Young Farmers do’s and dances over the years and even been to the same college at a similar time, so our paths had crossed on a few occasions but we’d never actually met.

We have a sheep farm in Yorkshire and Glenys is a veterinary nurse so when she came down to take a look round she was really interested and got involved right from the start with real enthusiasm, especially with the sheep. She’d been brought up on a hill farm and was used to helping her dad with the sheep as a child.

She now helps with the lambing, and has even been showing some of the pedigree Limousins we breed. She had been washing and grooming them before at a sale at Skipton last year so when I suggested she take one round the ring she went for it! It was a case of “in at the deep end”, but she managed really well.

We’re living together in the farmhouse now and got engaged last year during a weekend break in the Lake District. I proposed at sunrise at Castlerigg Stone Circle – down on one knee – and she said yes. I’ve recommended Muddy Matches to a few friends who are still single, but time will tell if they’ve taken my advice or not. It’s certainly worked out for us! 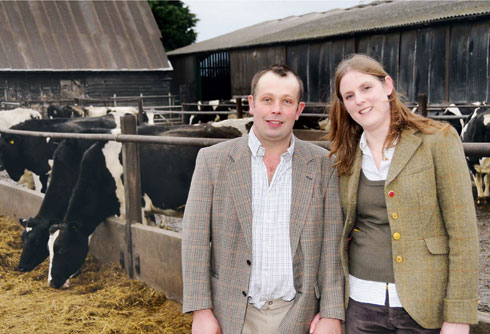 Anna’s story…
I’m a veterinary nurse and have always enjoyed the outdoors, but I never imagined when I joined Muddy Matches that it would result in me driving a tractor with a full trailer of straw bales along the A1 – not to mention marriage and a new baby!

It all began back in May 2009 when I joined Muddy Matches and started looking for someone near where I was living, on the Norfolk-Suffolk border. I’d been single for four years and had two children from a previous relationship, so it wasn’t easy to meet new people as a single mum.

But after a few months on the site I just happened to click on the Bedfordshire area one day, which is where I saw Richard’s profile.

Pretty quickly we got in touch and then on the very first phone call we spoke for two hours, so I knew I liked him before we met up for a meal at Newmarket a few days later. I’m not from a farming background, but love horses, which meant I joined the Pony Club as a teenager, rather than Young Farmers.

Richard was working hard in the family business when he was in his teens and 20s, so didn’t really make time for dating. I’ve since discovered just how hands-on dairy farming is and I love it and help wherever I can, feeding calves, driving tractors and doing whatever is needed. Richard and I got married a year ago and have just had a baby, Jack. And the older children have adjusted really well to living on a farm.

There have been a few baptisms of fire – the most memorable of which was when Richard, his father and I were all loading straw bales on a farm six miles away from home and I suddenly realised that I had to pick my children up from school about an hour later!

There was no option – I had to get in the tractor and haul the fully laden trailer all the way up the busy A1 in a convoy, with Richard in front and my father-in-law behind! But it doesn’t faze me now – last year I carted about 90% of the silage home. It has all turned out really well and I couldn’t be happier.