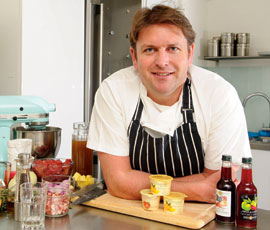 Three high profile food presenters are showing their support for British farmers by coming to this year’s Farmers Weekly Awards Night on October 4 at the London Grosvenor House Hotel.


James Martin, star of Saturday Kitchen and Ready Steady Cook will announce the winner of the top accolade – the Farmers Weekly Farmer of the Year.

Chefs have played a critical role in championing British, seasonal and local food.

None more so than Mr Martin, who as a livestock farmer’s son, understands the issues: “We seem to take food for granted. It just arrives on our doorstep and we forget it is people’s livelihood.”

On the issue of milk pricing he is adamant:  “The price of food has to be relative to its quality. We have got to support the producers.”

Another guest is Nigel Barden, the food presenter on Radio 2s, Drive Time Show. He helped to choose the all-British menu for the Awards Night of carpaccio of Hereford beef, roast rump of lamb and quartet of British deserts.

His extraordinary knowledge of local, artisan and seasonal food was inspired during his upbringing on Yorkshire and Lancashire farms.

And another key influencer in the food world, James McIntosh from home economics consultancy, Whisk, will also be a guest. He too, is a farmer’s son, from Portadown Northern Ireland.

Watch the video of Nigel Barden on choosing the awards night menu.