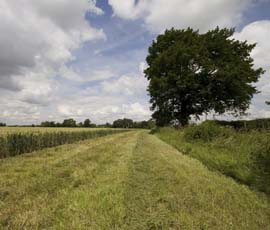 A Farmers Weekly article on “unsustainably high” rent payments has sparked a debate on the levels paid under farm business tenancies.

Ian Pigott wrote about the “short-termism” that surrounds FBTs, suggesting the high rents were prompting “quarry farming” with people who’d pay them then having to “scavenge the soil for every available nutrient on offer, leaving nothing behind”.

“Tenancies should encourage the farmer to treat the soil like a marriage, not like a one-night stand,” said Mr Pigott.

On the FWi forums, Stuart Meikle said: “Ian is quite right, soil management and agriculture is a long-term business and planning and management should treat it as such. Having said that it is a difficult to do so when its control is reduced to that which can be achieved under a short-term ‘rental’ agreement. It comes back to how you look at agriculture land – is it for providing food and food security, to be managed for the benefit of the human population or is it just any other business asset where the financial return counts first and foremost and where it can be used or abused with total freedom in the pursuit of monetary profit?

“As agriculture’s fundamental asset becomes increasingly in the hands of speculators who are holding it in the expectation of a captial gain, what does one expect – rents that relate to its food production capability or rents that relate to what its current, speculative capital ‘value’ is?” added Mr Meikle.

Meanwhile, forum user ‘doughalhtid’ says: “For the genuine tenant farmer, anything close to £100/acre is getting dangerous. We can all do budgets and gross margins along with predicted yields, but none of them are any good when prices suddenly crash or a wet harvest wipes out half your yield. The trouble is the owner occupier can ride this out the tenant can’t. Have most people forgot 2009 when N hit £400/t and wheat went below £100/t? It wasn’t in the 1930s – it was three years ago!”

Forum user ‘Harry the Land Agent’ said: “Too many farmers are working out what is sustainable, and then adding £100/acre. It’s impossible as a land agent to persuade a landlord to accept £100/acre when there are offers at £200/acre-plus. Land agents are not the drivers – those tendering these rents are.”

Meanwhile, in a letter to Farmers Weekly, Harry Baines, of Chesterton Humberts, said: “As a land agent with clients on both sides of the fence, I take issue with the comments by Ian Pigott (whom I know and admire for his work in getting the public onto farms).

“Leaving aside understanding of the complexities of the AHA rent formula and the legal differences in the two different strands of relevant legislation, Mr Pigott (and many others) seem to be overlooking the fact that the drivers of FBT rent levels are the farmers tendering.

“Some farmer clients of mine rightly refuse to tender at these levels. Some landlords are wary of the high rents being offered, but in some cases can do nothing other than accept the highest offer, for example investment funds or trusts.

“The highest rent tender is not necessarily the best, as some landlords have discovered in the last 12 months, but try persuading a landlord to take less than the highest offer – especially an investor.

“When farming businesses are willing to subsidise unsustainable rents there will always be an artificial FBT rental market. If each tender was based on what could be produced from the subject land, rent levels would not be at the levels we are seeing,” added Mr Baines.

“Those of us who were practising in the mid-1990s will recall the introduction of FBTs and the high rents that resulted in losses for the tenants – in one case I know for each of all five years of the fixed term. I hope that we do not see history repeating itself – for all concerned, but especially the farmers.”

Have your say on this subject on the Farmers Weekly forums.