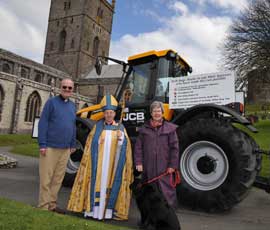 A clue to the Rev Richard Kirlew’s former profession lies in the mode of transport he chose for a 650-mile charity tour of Wales.

Rev Kirlew, whose parish of Llanelwedd lies within a stone’s throw of the Royal Welsh Showground, studied agricultural at Askham Bryan College in York and once worked on a farm. His great passion was farm machinery.

It’s no surprise, then, that he commandeered a 7.5t JCB Fastrac to drive around Wales to raise money for farming charities, including the Royal Benevolent Agricultural Institution and the Farm Crisis Network; he’s raised well over £3,000 and the money’s still coming in.

Rev Kirlew is not your typical vicar. He was ordained late in life – in Wells Cathedral in 2005 after a working life that included a spell in the ambulance service and running a classic car storage business. “I had been fighting off ordination for a number of years, but I was eventually collared in the true sense of the word,” he jokes.

His first parish was Somerset and Wells and while there he chaired the diocese’s rural life group. “I’d always felt a connection with farming and was very keen to do what I could to support that community,” he says.

Rev Kirlew later crossed the border into Wales as vicar for Swansea and Brecon, and three years ago was appointed as the national rural lead for the Church in Wales.

He is a regular visitor to livestock markets and believes they’re a vital social link for the farming community. “They are an opportunity for farmers to meet up and chew over the fat. When I visit, I notice they are always absolute hubs of chatter, places where people can share their concerns or seek advice from others over a cup of tea.”

He recognises that isolation is becoming more of an issue, as more farmers’ wives seek employment off-farm to supplement the family income. “Isolation is more of a problem in Wales because we have a high concentration of small hill farms which tend to be run by one person.”

His rural parish has a high volume of second homes and, in years gone by, his congregation would be swelled by city dwellers spending the weekend in the country. But in the last 12 months he has noticed a worrying trend, which he believes has been sparked by the high cost of fuel. “We don’t see nearly as many of these visitors any longer. Those that I have spoken to are finding it too expensive to drive here,” he said.

Not only is it impacting on church numbers but on rural businesses, some of these run by local farming families, which rely on visitors for their own income.

Rev Kirlew sees the church as becoming more of a focal point for the community. In many villages where the school, shop and pub have been lost, it is the only remaining resource.

His inspiration for this particular feat came last year after reading the story of a man who drove up Snowdon in a 4×4 vehicle. “Although he had broken the law, I remember his comment that it was one of those things that he had to do before he died,” he recalls.

“It concentrated my mind and made me realise that there were things I needed to do before I died. I felt it had to be something connected with farming because of my position as national rural lead and something that raised money for charity.”

Last summer, while at the Pembrokeshire County Agricultural Show, he visited the stand of a local machinery dealer and together they hatched a plan. They would supply a vehicle and he would take himself off around Wales on a charity fund-raiser.

He set off from St David’s Cathedral, in Pembrokeshire, and travelled around Wales with his wife, Liz, visiting each of Wales’ six cathedrals on his route. They had their overnight accommodation in tow – a caravan – but took steps to mitigate the annoyance of other road users. “We had got a sign on the back explaining what we were doing and assuring drivers that we would be pulling over regularly to let them pass,” Rev Kirlew explains.

His wife was very keen to join him for the trip. “We tend to always do things together, we share the ministry, so I was delighted that she wanted to come along,” he says. And the family dog, Raife, hitched a ride too.

The diesel is being supplied by Mole Valley Farmers and JCB waived the insurance fee for the Fastrac so all the money they raise from their travels will go directly to the charities.

Representatives of the charities were at St David’s Cathedral to wave him off, including Erys Hughes, RABI’s Wales regional officer.

He said the demands on the charity were as great as they had ever been since the foot-and-mouth crisis. Families who had got caught up in the collapse of Dairy Farmers of Britain and more recently Farmright and those who were struggling to cope with bovine TB, had been turning to the charity for help.

“We are there to help families, not farm businesses, to keep food on the table,” Mr Hughes explained. “Richard’s tour of Wales is not just about the money he will raise for charities like ours but of the awareness he will create of the work of those charities.”