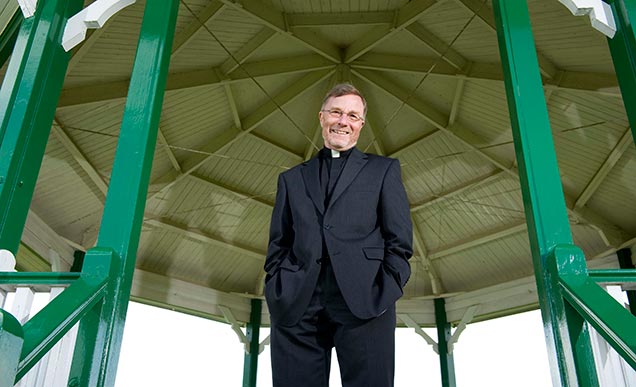 Get your first funeral right and you are made as a rural vicar, says Canon Leslie Morley.

“Seriously, if it is a well-known local person the whole village will turn out and be listening to every word to see if you do the deceased justice,” adds Leslie, who has spent most of his working life supporting the farming and rural community.

“It happened to me. The funeral director, who was also the local joiner, as they often are in the countryside, turned to me after my first rural funeral and said: ‘That was alright.’ The relief was immense; I thought: ‘I’m in.’”

Leslie was recently presented with one of the Yorkshire Agricultural Society’s highest awards. The society, which organises the Great Yorkshire Show, joins forces with the Royal Agriculture Benevolent Institution (Rabi) to make an award each year to the individual who has made the most outstanding contribution to the rural community.

For the past two decades Leslie has been a driving force in the Yorkshire Rural Support Network, which was established to combat concern about the rising numbers of suicides in the farming sector. In addition he has been the agricultural society’s chaplain since 2008.

He believes the future of rural parishes lies in churches “not just being Sunday buildings”.
“We have to be adaptable to new uses,” explains Leslie. “The church is the largest voluntary organisation in the countryside and as shops, post offices and pubs disappear it is really important to sustain our presence.

“It can be a great battle, but pews sometimes need to be moved and toilets put in. Churches have to be usable spaces for everything from the mother-and-toddler groups and coffee mornings to the more unusual. The church is part of a bigger story than the buildings we are in.

“Country people don’t like change for change’s sake, but when they realise change is necessary, they are very adaptable.”
Leslie Morley

“Some people will say country people should travel to the nearest market towns. But that misses the point, which is that we are already among and alongside rural communities. It would be wrong to leave them. It is more a question of using our buildings in a more open-minded way.”

Leslie was a founder member of the Yorkshire group of the Farm Crisis Network (now Farming Community Network – FCN) and is currently a national board member.

This group was set up in 2000 and was almost overwhelmed with cases relating to the foot-and-mouth crisis in the following year.

Leslie was part of a small team involved in dealing with more than 1,500 telephone calls from farmers and businesses and was very active in the measured allocation of millions of pounds of emergency funding.

In due course he became the primary liaison link between FCN and the Rural Payments Agency stress team and many farmers – especially in those very difficult days of delayed payments – had reason to be grateful for his calm and measured advocacy skills.

“The church came into its own during the foot-and-mouth crisis,” remembers Leslie. “Various agencies were rushing in, but the churches were already there. Not short-term, not with an individual agenda, not selling or criticising. Simple things such as sending a letter or ringing the bells at noon so the farmers knew we were thinking of them. The way communities pulled together during those dreadful, deeply worrying times was marvellous.”

Being a rural vicar can, says Leslie, be a very isolated job. He says he has been lucky to have the support of his wife Georgina, a retired teacher of theology.

“Sometimes it is a job where you can be surrounded by people, but actually very alone, if you don’t have a partner,” says Leslie, who has been very much in favour of women bishops and the arrival of female clergy.

“I imagined rural communities would be wary of women vicars but – not for the first time – the reverse of what I’ve thought has happened,” he laughs.

“Country people don’t like change for change’s sake, but when they realise change is necessary, they are very adaptable. When you think about it, rural communities have been adapting – taking change in their stride – for generations.”

An annual highlight for Leslie, who lives in County Durham and has farming in his family, is the three-day Great Yorkshire Show.

“At 7.30am each morning I will be on the bandstand taking a half-hour service,” he says.

“There are always at least 50 people, many of whom have animals to tend, or classes to prepare for, but they make time to come. It is very commendable that the society recognises this spiritual dimension to the show.

“I am then involved with the RABI, FCN and Church on Show stands, as well as just being around and about.”

Leslie has been instrumental in a host of schemes, such as the Yorkshire Rural Support Network, which helps farmers improve the skills needed in today’s fast-changing world.

“At a grassroots level it is about having a presence at places such as agricultural markets, to be known and trusted by the farming community,” he explains.

“On a more practical note, we might offer discussion on a variety of subjects such as farm succession planning. Farming is at the cut-and-thrust of a number of very important issues with our growing population, such as food security and provision, climate change, ecology and so much more. Some of our world’s toughest questions can be found among rural communities.”

Leslie says there is little to match the feeling when farmers he has met over the years overcome problems.
“A good example is a farmer who I got to know quite well who was struggling,” says Leslie.

“He was worried about handing over the tenancy to his son – frightened it would be a poisoned chalice. It was such a joy; five years later, to be invited back to see how his son had transformed the farm. It is such a privilege to build up such long-term relationships with families.”

Other highlights have included watching tenant farmers buy their farms and being in the thick of farming life.
“This award doesn’t mean I have retired,” says Leslie. “I was very humbled by it. A healthy church life is about more than now and more than me. There is a bigger story out there and much more than people realise is being played out in our rural communities.”