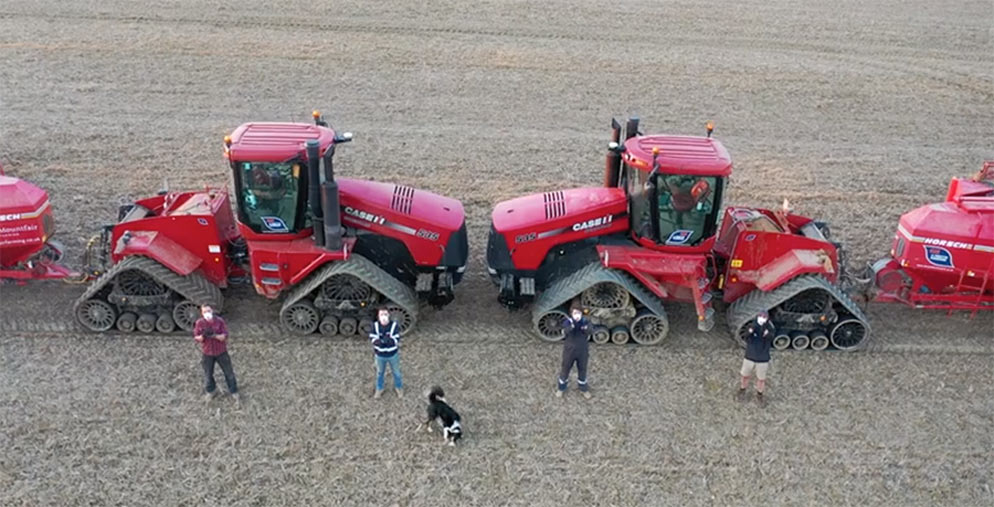 The farming industry has been paying its own special tribute to the NHS and social care workers tackling the coronavirus pandemic.

Across the UK, millions of people took to their doorsteps and windows for a “Clap For Carers” tribute at 8pm on Thursday evening (26 March) to applaud NHS workers and carers.

Farmers made their own personal tributes, posting photos and videos on social media using the hashtags #clapforourcarers and #thankyouNHS.

Local joiner and farmworker Edward Atkinson then flew a drone over the team, recording aerial footage of the workers wearing masks, standing 2m apart in line and applauding together. The video, which has been uploaded to Twitter, Facebook and Instagram, has received hundreds of views and likes.

Mr Forsyth told Farmers Weekly: “We wanted to do something special to show our appreciation and to show the farming community is thinking about the NHS and care workers.

“They are going through a really tough time. I cannot imagine how hard it must be for them, and I hope this video might just give them a bit of an uplift. Our thoughts and prayers are with them at this challenging time – we really appreciate how hard they are working under very difficult conditions.”

Mr Forsyth said farmers are working hard during this busy spring period, drilling crops, calving and lambing. “Farmers are decent folk. We can feed the nation. Buy British,” he added.

Warwickshire farmer and agricultural contractor Chris Gardner said on Facebook: “Even though we’re fairly isolated at the farm, we could still hear vehicle horns and local noise in support of our heroic NHS staff at 8pm this evening. Fantastic!!”

Denbighshire sheep farmer Llŷr Jones posted his own personal tribute on Facebook, recorded in his sheep shed, using cards with messages as the animals bleated in the background.

“To all the doctors, nurses, carers, GPs, 500,000 volunteers and all the NHS staff that make it work. Thank You. Diolch.”

“There are no words to express our gratitude to every individual working on the front line and supporting the NHS. From everyone who works at Arla and the farmers who own our company, THANK YOU,” said Arla.

There are no words to express our gratitude to every individual working on the front line and supporting the NHS. From everyone who works at Arla and the farmers who own our company, THANK YOU. #ClapForOurCarers #ClapForCarers #clapforourcarers #clapforNHS pic.twitter.com/TjbiG737Ux

Agronomy company Agrii said it had donated all of the personal protective equipment (PPE) from its Dunkirk depot to the “incredible staff” at Addenbrooke’s Hospital, in Cambridge.

The company tweeted: “A small gesture in the grand scheme of things but we hope it helps.”

We've donated all of the Personal Protective Equipment #PPE form our Dunkirk depot to the incredible staff at #Addenbrookes Hospital.

A small gesture in the grand scheme of things but we hope it helps! #NHSheroes #DoYourPart #Covid19 pic.twitter.com/yfWUvDvInI

Meanwhile, Defra farm minister George Eustice paid his own tribute to farmers up and down the land, working hard to produce the nation’s food.

He said: “There are many key workers that are crucial to the resilience of our country. Our NHS staff will be working harder than ever in the weeks ahead. Those of you working to provide the nation with food and other essentials are also delivering an absolutely vital service.

“In many cases, you are the hidden heroes, and the country is grateful for all that you have done.”