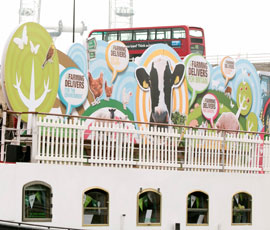 The Fast Show comedian Simon Day has appeared in a short film to promote the NFU’s new Farming Delivers for Britain campaign.

In the video, the TV funnyman explains why and how farming delivers for Britain.

Best known for his roles in the BBC comedy programmes The Sketch Show and The Fast Show, Mr Day says: “You don’t think about the environmental side of things, or that three quarters of the country is kept by farmers, or how much they contribute to the economy.

“Choosing a London voice, rather than a cartoon with some cows and a farmer in it, is a good way of doing it. It will hopefully make people stop and think. You got the right man for the job – I am Mr Farmer. Even though you wouldn’t know it to look at me.”

The campaign, launched last week with a farming-themed boat on the Thames and an MP reception at Westminster, aims to educate the public on what farming does for the UK.