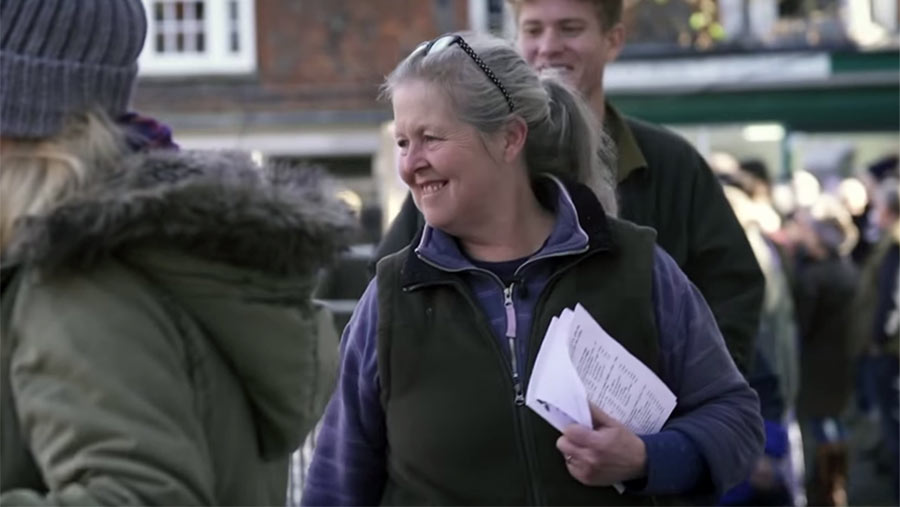 It’s a new month which means the penultimate episode of the British Farming series has been released.

Buckinghamshire livestock farmer Sarah Denne shows no sign of slowing down as she prepares for  some of her favourite November things – feeding and fat stock showing.

She’s again joined by her son Rufus for an early start to the day as they work to cherry-pick the best lambs for their local prime stock market, held in the heart of nearby Winslow.

See also: How the Montbeliarde breed adds value to a dairy business

After a less-than-serene unloading process in the bustling centre of the market town, Sarah and Rufus settle in for a long morning of catching up with some familiar faces as the judges cast a close eye over their Charolais and Beltex fat lambs.

“I get a few butterflies,” Sarah admits, ahead of finding out she’s been awarded a brace of rosettes for her lambs.

“It’s all local farmers and it’s a lovely thing to put on – there’s a great atmosphere.”

Short, wintery days mean there’s still plenty to do back at base – feeding and bedding up as the mid-afternoon light dims.

“This is the start of my winter routine,” explains Sarah. “It’s full on now for November and December and January, and then we start lambing in February.”

There’s also some relationship counselling to be done between Sarah’s pride and joy, gander Edward, and his goose, Crystals, whom you may remember arrived on the farm earlier this year.

“Edward needs a new wife – she’s useless. She thinks she’s a chicken and Edward can go stuff himself,” says Sarah.

Watch the full episode below.

What is the British Farming series?

This candid web series follows the life and work of Buckinghamshire livestock farmer Sarah Denne and is produced by her son Rufus and co-creator Josh Aarons.

The pair are documenting a year in the life of a British farmer, sharing one video each month on YouTube. You can watch all the episodes in the series so far on their website.