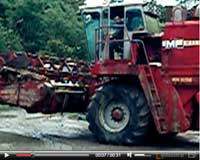 Farmers are generally a pragmatic lot, but even the most unsentimental can develop a soft spot for a favourite animal, or even, as Farmers Weekly discovers, a combine harvester.

I’m normally the strong, silent type, not given to displays of emotion, but there was a day back in the winter when I was moved to shed a tear: it was the day we all said farewell to Daisy. After fourteen long years of faithful service she was moving on to pastures new. Actually, that should be “arable fields new”, because Daisy wasn’t a collie, or a sucker cow; Daisy was my New Holland TC56RS combine harvester.

What was so significant about her was that we bought her in 1995. That’s not all that long ago really. It’s true that fourteen years is a good length of time for a bit of farm machinery to stay on a farm, but it’s only when you dig out the farm diary that you realise the astonishing changes that have taken place since those golden years.

In those days we had something called a deposit account. The IACS cheque went straight into it, where it sat gathering a healthy bit of interest until it was called upon to help out the current account. The deposit account is still there, but “healthy” is not a word you’d use to describe it. Empty is nearer the mark. The SPS payment now goes straight to the current account, where its arrival can quite often go unnoticed.

Our suckler herd was at its peak. Jester the bull and his gaggle of girls churned out the chunkiest of calves every year, which would sell for a small fortune each – don’t forget that this was pre-BSE. Wheat prices were healthy, farming looked fine – so much so that we decided the time was right to start a family.

So when it came to buying a new combine the poor salesmen had to contend with a kitchen full of nappies, bottles and squeaky toys. We finally chose the New Holland, but, as ever, the details took forever to be sorted out, by which time salesman Steve was an honourary godfather to just-crawling Anthony – now a hulking six-footer who loves nothing more than flattening people on a rugby pitch.

Something hit the fan in March 1996 – the BSE storm broke, just as child number two arrived. The terrifying maelstrom that is the opening years of parenthood (I don’t care what anyone says: nothing prepares you for it) happened to coincide with complete mayhem on the farming front. We lurched from crisis to crisis – foot and mouth, the heartbreaking abandonment of the suckler herd, the collapse of grain prices, and a chronic bad lower back that refused to get better.

Through all these years, Daisy would faithfully plod her way through each harvest. Tractors came and went, some good, some bad, some truly dreadful. The toy ride-on tractors that came with each new big version were loved, then forgotten, and then went in the skip. Employees came and went, all good, but most unfortunate to have spent a spell working for Hampshire’s worst employer. Every year Daisy would show her age a little more, but every winter the local dealer would do a front-to-back appraisal and overhaul what he thought was needed. And every harvest his judgement would prove to be spot on: breakdowns were almost non-existent.

But this year she really did start to struggle. Nothing major: the sump gasket oil leak got a bit worrying, the engine got a bit warm even on a cool day (the chopper blades needed changing) the perished tyres needed pumping up a bit too frequently and a couple of the main drivebelts started to look a bit floppy and frayed. And when the cost of the winter overhaul looks like being the same as the first annual payment on a new machine, that’s the time to change. And if I had any doubts left they were banished when the radio, which had been struggling along on one speaker and longwave only, gave up altogether – luckily, just after the Ashes victory.

For some years, dealer Bob had been calling in whenever he passed, asking if Daisy was for sale. So when he called in last Autumn, I said yes. And after the world’s shortest haggle (“How about… this much?” “OK, Bob.”), the deal was done.

It was then back to the New Holland agent, to ask for the same again. Well a salesman wouldn’t be a salesman if he didn’t talk me up to something larger, so a scary cheque was written for a TC5070, slightly bigger in all departments (cutterbar, tank and engine) but still with the same reassuringly simple innards under the tarted up body panels. We’re going to call the new one Flora.

And so, on a cold December day, the lorry came to get Daisy. She seemed reluctant to go – the brakes were sticking and the fuel pump seemed to be struggling – but I coaxed her onto a lay-by on the A272 and up onto the lorry bed. I gently tapped one of those perished front tyres as I left her:”Don’t worry, I’m sure they’ll look after you wherever you’re going,” I said, a little too loudly. I saw the driver smile. “You must think I’m an idiot, getting all soppy over a machine,” I told him.

“Not at all,” he said, as he expertly ratcheted another strap over Daisy’s back axle. “Some places I go, it’s like a bloomin’ funeral!”

Which made me feel a lot better.

Machinery editor David Cousins got so attached to his Massey Ferguson 765 he recorded its last moments on camera before it was sent to the scrap heap in the sky.Charlie Flindt may shed a tear when a good and faithful machine finally leaves the farm, but at least his combine was going to another loving owner. What’s far more poignant is when you have to switch off its life support system and send it spinning into the next world.The thing about a combine is that you don’t just sit there and drive it. Instead, you battle against a hundred enemies – laid corn, blocked drums, knackered bearings, slipping belts, rain, mud and itchy, itchy dust. Hour after hour, year after year, it’s the two of you against the world.

And then the day comes when that once shiny and new combine is simply too old to carry on with. So on the last day of harvest, in the last field of standing corn, you scoop up the final bit of standing corn, empty it into the trailer, pull behind the barn and switch off the engine.And that’s it. The engine cools and ticks, oil trickles back into the sump and air-con fluid sighs. A life that began some 20 years earlier in a brash mid-western factory has finally come to a close.The day the scrapman came over to cut up and take away our old-but-reliable MF765 a few years ago was a truly sad one. It had sat unused at the back of the barn for several years so it wasn’t looking very smart for its funeral. But we put a new battery on it and (as ever) it started first time.As the scrapman adjusted his cutting torch, like an executioner honing his axe, we moved the combine into place on to a concrete pad. I recorded the old combine’s final few moments of life on video, even the death rattle in the last second or two. Macabre, but true.

• Do you have a fond memories of a bit of kit? Why not share them on our forum?