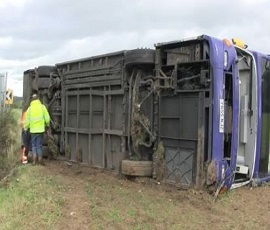 A double-decker bus was blown over by heavy winds and landed in a farmer’s field near Hadleigh, Suffolk.

The accident happened during stormy weather at about 8.15am on Monday (28 October).

Homes and businesses were left without electricity as high winds toppled trees and power lines.

NFU Mutual has reported that the south coast, Isle of White and East Anglia have seen the worst of the storm damage.

While the damage has not reached the levels of the 1987 storm, the insurer expects claims to rise in the coming days.

Matthew Scott, NFU Mutual chief claims manager said, “By midday we had been notified of around 50 claims for storm and flood damage, we expect this number to rise in the coming days as claims for more minor damage are submitted.”

Most reports so far are of damage to tiled and sheeted roofs on farm buildings and vehicles hit by falling trees.

Mr Scott warned people living in low-lying areas and near watercourses to be prepared for possible flooding in the next few hours.