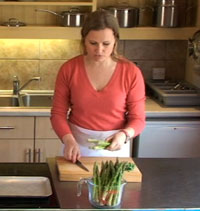 There was eventually a silver lining to the clouds that rained down during last year’s hay-making season.

According to David Douglas, a local asparagus producer who I visit when we’ve finished our own home-grown crop, that wet weather resulted in a lot of growth in the asparagus ferns which should bode well for this year’s crop.

This, of course, still depends on the weather warming up prior to the start of harvesting, which this year was on the 26 April, was two weeks later than his earliest date but by no means the latest he’s started cutting.

Asparagus is my favourite vegetable and its arrival heralds the real presence of spring and warmer weather.

I just love using it as it doesn’t need much elaborate cooking. The best way in my opinion is to roast it with a little olive oil and plenty of seasoning, preferably as soon as it is picked, in a hot oven for just 10 minutes.

It also makes a great summery substitute to roast potatoes when I cook the chicken with tarragon sauce. If you prefer a lighter dish try boiling very simply with Jersey Royal potatoes to make a delicious and simple salad.