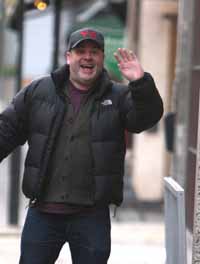 Radio 1 DJ Chris Moyles has given a hit song a distinctly rural flavour in the latest of his musical parodies.

Moyles, who hosts the popular breakfast show, performed a version of Ke$ha’s hit We R Who We R called Agriculture on Monday’s show.

Opinion among the rural community has been mixed about the song, which starts with the lines:

“We make our cash from crops and wool,

Our farm’s got pigs and cows and bulls

We all drink cider as a rule…”

Some people find it hilarious and believe it’s set to become huge on the ag college and young farmer circuit, while others reckon it’s patronsing and panders to stereotypes.

As one FWi forum user puts it: “You’ll either love it or loathe it.”

Tell us what you think about it on our forums.