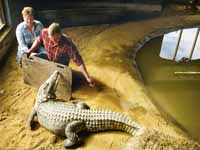 The Nile crocodile has an infamous reputation as a cold-blooded, man-eating killer, happy to drag unsuspecting bystanders into the depths of the swampy rivers it frequents.

It’s generally accepted to be the most dangerous of the crocodilians and, with hundreds of fatal human attacks occurring in its native sub-Saharan habitat every year, it seems a brave choice for a farm diversification venture in Cambridgeshire.

But farmers Andy and Tracey Johnson have bought four of these predators onto their 40ha holding near Huntingdon and they are hoping to rear them for meat.

A male and three females have been living on the farm for six years and they are just reaching reproductive age, says Andy. “The females are full of eggs and they should be laying 30-70 each.”

The reptiles are kept in a specially-designed, secure building and Andy is a registered holder under the Dangerous Wild Animals Act.

Andy and Tracey frequently enter the enclosure during feeding times and for routine inspection of the animals and proper protection is required.

This comes in the form of a battered pig board, which is used to prevent legs being bitten. It’s also crucial to maintain eye contact and you should never show that you are frightened, says Andy.

However, he is quick to point out that their vicious reputation is a little unfair. “They’re surprisingly easy to work with,” he says. “Anyone who knows how to handle stock should be able to work with them.”

Each of the crocodiles has a unique character and Andy says they can even be affectionate at times.

That said, he has received one bite and Tracey has been on the receiving end of two nips. But they did let go as soon as they realised what they’d done, he says.

Because they are virtually indiscriminate feeders and their digestion is 98% efficient, they are surprisingly cheap to keep and a great way to dispose of waste meat.

“We offer them food once a week, but in the winter they hardly need feeding,” says Andy. “I think they are one of the most efficient farm animals there is.”

Because they are fed entirely on scraps from the butchery in the farm shop, feed costs are nil. “It’s environmentally sound, because no cereals are needed to feed them and you are turning waste products into a premium product.”

This would make crocodiles an ideal add-on for intensive pig and poultry units, he points out. “The heat from the units could be used to keep the correct temperature in the crocodile enclosure and the waste meat, which is usually incinerated, could be used to feed them.”

Anyone interested in owning a Nile croc will have to shell out £1500-2000 for a year-old youngster, but an animal at breeding age is worth about £6000.

But because they are cold-blooded the crocs need to be kept at a constant temperature and that requires a purpose-built enclosure. To replicate their natural habitat Andy and Tracey constructed an east-facing building, which is kept at a constant 83F, using low-energy air-source heaters.

Before the breeding programme and farming operation can commence, an incubator unit will have to be added to the building. “It might take a while to crack the hatching process, but once we get it right we should have plenty of young to rear on-farm,” says Andy.

The offspring’s sex can be controlled using temperature, with just a couple of degrees difference between hatching females or males, he says.

Nile crocodiles are fairly resilient animals and don’t suffer readily from pests and disease. It can be easy to over-feed them and they occasionally suffer from a skin infection, but that’s about it, he says.

None of the farm’s crocodiles have yet gone to slaughter, but meat from a South African farm is already being sold in the farm shop.

“The meat is as good as fish. It is as white as cod and the texture is a bit like monkfish,” says Andy. “It’s really popular and, although it’s expensive, I have no problem selling it.”

The prime cuts are two small fillets under the tail, which are tender and flaky, followed by the main tail fillet, which is slightly tougher.

The rest of the animal is diced into nuggets and almost all of it can be eaten.

The best cuts sell for £36/kg, but Andy says the price will fall once the meat can be produced in the UK. “I would like to get it down to £20/kg once we are producing.”

Teeth have a decorative value and skins can be particularly lucrative. Andy is currently tanning his own hide, which he plans have cut into a jacket.

“I want to tan the skins on the farm and give a proportion of the money back to wildlife charities in Africa so the wild animals can continue to be protected.”

Andy and Tracey’s crocodiles came from a reputable Belgian breeder and were bred in captivity, he says.

The crocodile-farming venture is, in fact, just one of a string of unusual animal diversifications on the farm. Ostrich, emus and water buffalo can all be found at Church Farm.

Andy and Tracey have four ostrich, mainly laying eggs for the shop, but the meat is also on offer, says Andy. “You can get seven pavlovas from one ostrich egg.”

They also have a number of emus, which they are breeding for meat production. “Emus seem much happier than ostrich in the UK climate, so we are planning to phase out the ostrich over time.”

The Emu’s dark green eggs are slightly smaller than ostrich eggs, but are proving a popular product in the shop.

The pair also has 20 breeding fallow deer and a 100-head longhorn/limousin cross suckler herd, as well as 250 head of rare-breed pigs.

Because the farm is only 40ha, Andy and Tracey needed to diversify for the business to support their family. As well as doing this, it now also employs 12 staff and the farm shop provides an outlet for local produce.

The farm is open for visitors and there is no charge for viewing the animals, says Andy. “We want to bridge the gap between the public and farmers and show that these animals are being reared as a business and will be killed for meat.”

It’s particularly important that farm animals are not treated as though they are pets, he adds. “We shouldn’t be hiding behind the hedge. We need to be transparent with the public and show them what farming is really about.”

The Johnson family has been producing meat for over 100 years at Church Farm, Old Hurst Huntingdon, Cambridgeshire.

Andy and Tracey have their own butchery and farm shop selling locally-sourced beef – which is hung for a minimum of four weeks – as well as pork, lamb, poultry and other meats.

The bite force exerted by an adult is around 5,000lbf torque

* Crocodile is easy to prepare and cook. It is best cooked from frozen as during the thawing process most of the moisture runs out diluting the flavour.

* It should be cooked for two minutes on either side and then allowed to stand for a few minutes. It is best served just cooked (in red meat terms, medium rare).

* Remove excess fat after cooking. Do not use a large number of ingredients (other than herbs or spices) – no more than three is recommended.

* If frying, always use butter or olive oil as they will not impart a flavour that is unique. Keep it plain and simple.

I remember eating crocodile as a bar snack in Illinois, US – it was like a cross between pop corn chicken and calamari @thomsok

It’s quite nice, tough and salty. Bit like “gamey” fish. But the monkfish comparison isn’t a fair one @naturefriendly

* The meat tastes more like salty chicken than monkfish @dalesbutchers