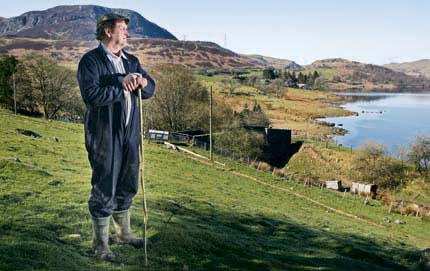 On the morning of 26 April 1986, a catastrophic explosion at reactor four of the Chernobyl nuclear power plant in Ukraine saw plumes of radioactivity released into the air over Europe.

The event not only changed the future for generations of Ukrainians, but also left a lasting legacy for thousands of farmers more than 1,300 miles away.

Perched on the western edge of Europe, few UK farmers would have thought an accident on the other side of the continent would have any impact on them.

“Breeding stock have to be marked with red paint before they can be moved, but they can’t go into the food chain at any point without being monitored to make sure the radiation has dropped to a safe level.”

The restrictions mean Mr Jones had to make big changes to the way he does business.

He brings his sheep down off the mountains earlier before selling them, as it was discovered that levels of radiation drop once livestock are moved from contaminated land.

Having to test and monitor sheep means he is also unable to make snap decisions over when to sell his animals. 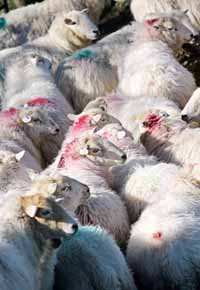 “Like every other routine you become accustomed to it and you can more or less plan your business within the restrictions.

“But what you can’t do is react to changes in the market – if there’s a flying trade on lambs you can’t take them to market because if you ring the inspectors it will be the following week before they come,” says Mr Jones.

“You can’t make decisions on the market the way other farmers can and that’s had an impact on the business over the years.”

Mr Jones says the restrictions damaged many farm businesses as people were initially put off from buying lambs marked as contaminated. Abattoirs were also forced to close as supplies of animals dwindled during the initial movement ban. “It was seen as a big gamble to buy [contaminated sheep] and, initially, farmers were wary about buying lambs with the red mark on their heads. They would always go for the unmarked stock. That happened for a couple of years until they understood the system.”

While farmers are paid £1.30 in compensation from the government for penning and monitoring sheep for radiation, the fee has not increased over the last quarter of a century.

DEFRA currently pays out about £5,000 a year to the eight Cumbria farmers who are still under resrtiction, which is administered by the Rural Payments Agency. In Wales, the bill for monitoring the 180,000 affected sheep can total more than £230,000.

Mr Jones says the payment is not enough to cover the work farmers have to do.

“When you think of the inflation over the past 25 years, to still pay us the original amount just doesn’t make sense,” he says. The number of farms that DEFRA has to monitor has dropped dramatically so you think it would be able to afford to pay us more.”

A DEFRA spokesman said all aspects of the remaining sheep controls in England and Wales are currently under review. “As part of this DEFRA is working with the Welsh Assembly to look at whether payments to farmers in affected areas are set at an apptopriate level,” she added. In the UK, there are “well-rehearshed plans” for a national response to any nuclear emergencies, the Department for Energy and Climate Change says.

Glyn Roberts, who rears 1,000 sheep on his 300-acre upland farm at Ysbyty Ifan in the Conwy valley, says many farmers were initially very frustrated with what they saw as the government stalling on reacting to the disaster and offering compensation. “The ban on selling and moving sheep meant cashflows were severely affected,” says Mr Roberts, who is vice-president of the Farmers Union of Wales.

“During the time we couldn’t sell our lambs or cattle, we had to graze some fields we should’ve saved for silage. We had a lot less fodder the following year and that was a great burden on our farm.

“I had some pigs at the time, which I thought would provide me with at least some money, but the abattoir went bust so I didn’t even get that. It took some aggressive lobbying by some annoyed farmers before we got any kind of compensation. Seeing as the UK has a policy towards nuclear energy you would think there would be some kind of action plan in place in case something like this happened.”

Indeed the Radiological Protection Institute of Ireland, the body responsible for monitoring radiation and advising the Irish government, said a much larger national response was needed if a similar accident occurred again, including the implementation of a national emergency plan. In a report published soon after the disaster, it admitted more needed to be done to support the agricultural industry and said it had moved swiftly to improve monitoring and communication systems.

The Department for Energy and Climate Change says there are “well-rehearsed plans” for a national response to any nuclear emergencies in the rest of the UK.

But for farmers like Aeron Jones and Glyn Roberts, the plans came far too late. “Farmers are already living in an over-bureaucratic world, but this constant red tape because of the radiation is something I can’t wait to be free from,” says Mr Roberts. “When you consider all the careful monitoring we have to do, I would say lamb from the affected areas is now actually the safest to eat in the world.”

Read more about how farmers are still feeling the effects of the Chernobyl disaster.