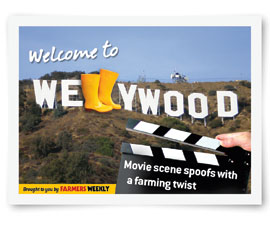 Farmers Weekly can now unveil the shortlist in its Welcome to Wellywood competition.

These four fantastic videos are now vying for the top spot in this coveted contest, which asked readers to make a spoof of a famous movie scene but give it a farming twist.

We received some fantastic, imaginative and funny entries – so thank you to everyone who put so much time, effort and creative energy into making their entries.

The shortlisted entries will now be watched by celebrity judge, TV star Matt Baker, who will then help Farmers Weekly pick the overall winner, which win £400 (plus £200 of cinema vouchers).

Here are the four videos on the shortlist:

This was made by Cwmni Garnfach, a media production company established 10 years ago, alongside a dairy herd in west Wales.

“Naturally, both occupations intertwine into one, and this clip is the result,” they say.

“The reason we picked this clip is to ask the question: Is it right to let the supermarkets dominate the industry? Should we stand up to them?

This entry came from the MyFarm team from Home Farm on the Wimpole Estate near Royston, Cambridgeshire.

“Starring in the video is our stockman, Mark, and the ram lamb is Wimpole Thornhill, the son of the ‘EweTube’ sensation RamCam,” says project manager Andrew Cock-Starkey.

“We picked The Lambing King because when we were working on ideas for our Wellywood entry, the farm was really gearing up for a busy lambing period. It seemed a natural fit. Mark is our ‘lambing king’ and Thornhill is our king of the lambs.

“We hope you enjoy watching it as much as we enjoyed making it.”

What Have Farmers Ever Done for Us

This Life of Brian Monty Python spoof came from Michael Hudson, from Cambridge, who works for Syngenta.

“It took a long time before I came up with this scene,” says Michael, who appears with his three boys and niece.

“Most previous ones were sci-fi related and the plans were far too ambitious. This came as a light-bulb moment and promised to be a great way to both enter the competition and say thank you to farmers for all they do.”

This is based on the first time travel scene from Back to the Future, which was made by the friends and owners of Bassett Farm, just outside Bath.

“We chose this scene as a lighthearted take on possible ways farmers could try to make money in the current economic climate (just don’t study the science behind the scene too closely!),” says Matt Amor.

Do you have a favourite? Leave your comments below and we’ll include some of them in the article when we announce the winner

See some more video entries that caught the judges’ attention