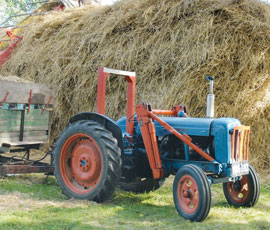 Two Suffolk thatchers use vintage farm machinery and long-stemmed wheat to grow and harvest their own straw – just like their grandfather used to.

About 75% of thatching straw comes from modern triticale varieties. But cousins Malcolm Macbeth and Trevor Death reap, thrash and stack about 9,000 sheaves of traditional Maris Widgeon wheat grown every year for them by Henry Engleheart at Steps Farm in Polstead.

“It can be hard work but it’s been a very good harvest,” explains Malcolm. “The straw is long, which is good for thatching, and it’s been a regular length across the field. It’s come up really well. It makes up for last year, which was a disaster.”

Once a common sight in fields across England, producing traditional thatching straw today is a niche occupation. About £20m of reed and straw is imported every year, according to the National Thatching Straw Growers Association. And producing long straw here requires dedication.

Popular with thatchers for decades, these days Maris Widgeon wheat must be grown from farm-saved seed after the last remaining supplier made 2009 its final season of production. At the time, it is thought little more than 20 acres of the crop was being grown annually.

When it comes to fertiliser, nitrogen levels must be kept as low as possible. Too much and the straw is too weak. Colour too is important. It should also be strong and supple and able to resist or even defy efforts to break it by twisting a handful continuously.

Buying-in thatching straw would be easier, but Malcolm believes harvesting and thrashing the crop himself results in a better product. “I feel I can guarantee the quality of the material we are producing,” he says. “But it’s fair to say we also enjoy doing it.”

The family business was started by Malcolm and Trevor’s grandfather Ernest James Death in 1928. Almost 85 years later, the two cousins continue to use the type of agricultural machinery – and traditional methods – familiar to their grandfather in his day.

In an era when a man and a single combine harvester can munch their way through hundreds of acres, producing thatching straw requires a gentle touch – and harks back to an age when farms enlisted help from dozens of local people at harvest time.

A team of eight helps bring in the harvest. Many of them are either local teachers or students, because the work fits in with the summer holidays. “Some of them have been coming back to us for years,” says Malcolm.

Since a combine would break the hollow straw stems, which mustn’t be damaged or crushed, the crop is harvested using a 70-year-old Albion 5A reaper binder. It cuts the wheat, transporting it by a canvas conveyor belt to be tied before leaving the sheaves on the field to be stooked.

“We got our first binder in 1983 and we went from there,” says Malcolm. “It’s quite hard to get replacement canvas these days, but we’re managing. If we can’t get a new belt when the time comes, we will probably have it specially made.”

A fleet of four tractors – three Fordson Majors and a Ford 4000 – haul the 14 trailers that collect and cart the sheaves to the main farm yard. “Some of them were originally horse-drawn, but we have converted them over the years.”

Once at the yard, the crop is thrashed and the straw stacked. Trevor looks after the 1949 Ransomes thrashing machine, cutting the twine that binds the sheaves and keeping them into the main drum. Meanwhile, Malcolm looks after the stack.

“Originally, all the farms around here would have been producing straw this way,” he says. “When you’re working on the roofs on your own for most of the year, it’s nice to do something that involves more people and has a bit of community spirit. And it keeps the tradition alive.