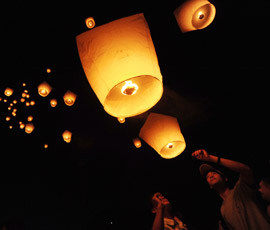 The Welsh chief vet has issued a plea to the public to think twice before setting off sky lanterns.

Christianne Glossop said the lanterns, which are constructed from paper, a wire or wooden frame and a lighted candle, were a fire risk and a danger to animals.

“The release of sky lanterns is still quite a common sight in many parts of Wales, however, I am keen to remind people of the hidden dangers of these devices,” Dr Glossop said.

“Lanterns can and do pose a serious danger to livestock, other animals and buildings. Indeed a recent independent report found that the fire risk associated with the use of sky lanterns – to agricultural crops, buildings and moorland – is significant.”

She also emphasised the danger to animals.

“We know that ingestion of debris from lanterns can and has, caused penetration of an animal’s digestive tract leading to peritonitis, heart problems and in some cases death,” said Dr Glossop.

“We know that ingestion of debris from lanterns can and has, caused penetration of an animal’s digestive tract leading to peritonitis, heart problems and in some cases death.”
Christianne Glossop, Wales’ chief vet

“I would therefore urge people to think twice before releasing lanterns and to carefully assess the impact that the lantern could have on the area surrounding its release,” she added.

A Welsh Assembly Government spokeswoman said that two Welsh local authorities had already implemented a ban on the release of sky lanterns on council-owned land.

“This has had a positive impact in terms of preventing large-scale releases and in raising public awareness locally,” the spokeswoman said.

Last month Welsh farm minister Alun Davies said he would encourage other local authorities to follow the approach and would also raise the issue with charitable organisations to ensure that they considered the wider impacts of releasing balloons or sky lanterns at their events.