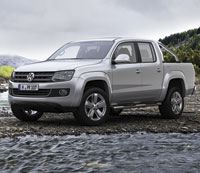 You’ve got to hand it to the Germans. They may be 20 years late entering the pick-up market but, on first impressions, they’ve leap-frogged the competition.

Production started late last year in the company’s Argentin-ean plant, and VW already reports 25,000 orders from South America, where it expects up to 50% of initial Amarok sales to be made.

The Amarok marks VW’s first foray into the world of commercial pick-ups. True, it rebadged Toyota’s Hilux as a Taro in the late 80s and offered the Caddy half-tonne 2wd until a few years ago, but it’s never produced a 4wd home-built model.

So what’s different about the Amarok? Structurally, it’s the usual get-up, with ladder-frame chassis and leaf-spring arrangement. But customers can choose between “comfort” and “heavy-duty” suspension. It’s worth bearing in mind that the comfort model has a payload of 948kg, putting it just under the 1t VAT threshold. The heavy-duty model can handle 1.15t at the same price.

On the outside it’s fairly plain-looking, but oozes VW’s visual DNA, with similar styling to the new Touareg.

Under the unobtrusive yet brawny bonnet, there’s a choice of two engines. A single turbo, four-cylinder, 2-litre 120hp common rail pumps out 340Nm of torque at 2000rpm. Or there’s the beefier, dual-stage, twin-turbo with 163hp and 400Nm at 1500rpm.

I’ve got to admit to being a little sceptical about sticking a 2-litre in a pick-up. When other manufacturers are lumping bigger blocks into their trucks, why has VW opted for this humble engine?

The Germans say they’ve opted to downsize engine sizes in favour of tweaking them to get more performance. The smaller turbo works at the low end while the bigger, more powerful unit kicks in towards the top end, producing what VW calls a harmonious torque curve.

The dinky 2-litre engine proves to be pretty economical (36.4mpg) and, because CO2 emissions are below 200g/km, there’s a fair saving on tax, too. Towing capacity is 2.8t, and the engineers have hinted this will be increased to 3t with a few Germanic tweaks going on behind the scenes.

Ride on the road lacks the jiggling you get in some pick-ups, but we did test the comfort model. It’s not sluggish, with 100kph reached easily in fifth gear. The six-speed box seemed a bit clunky, but didn’t take long to get used to. 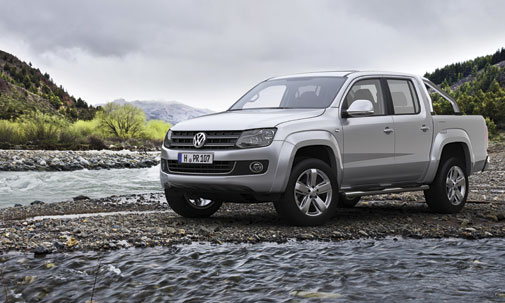 After some heavy rain, I expected the Amarok to struggle off-road. We tested the selectable 4wd model, but there’s a full-time 4wd option with Torsen diff and a 2wd version too.

It’s packed with sophisticated off-road and safety features, like hill ascent and descent, electronic diff-lock and hill hold-assist, which allows you to take your foot off the brake while you change gear without slipping backwards. One of the most impressive features is the off-road ABS. Instead of working like the usual ABS system, when you select 4wd via the electric switch the settings change meaning that, if you have to suddenly brake, the car uses the material that gathers in front of the wheel to assist braking, rather than locking up completely. Overall, the Amarok performed more like a high-end 4×4 off-road rather than a pick-up.

Get in and you could be forgiven for thinking you’d jumped into a regular VW hatchback. Controls lie close to hand, and the cabin seems bigger than others on the market, particularly in the back. This is partly due to its size; it’s longer and wider than other pick-ups on the market, measuring 5.2m long with a towbar and 1.9m wide.

According to VW, the Amarok’s deck boasts the largest dimensions in its class, measuring 1.5m by 1.6m and a load width between the wheel arches of 1.2m – enough to take a pallet sideways.

The Amarok is a welcome newcomer to the pick-up fraternity, offering something fresh and sophisticated for those wanting a true dual-purpose vehicle. The smaller engine shouldn’t put people off – there’s more than enough grunt to satisfy. We’re eagerly awaiting a price, which could be the one limiting factor. 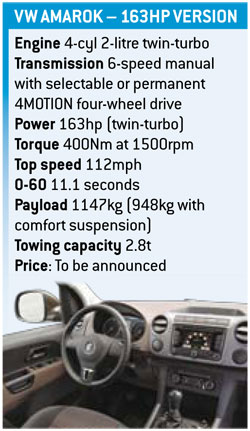