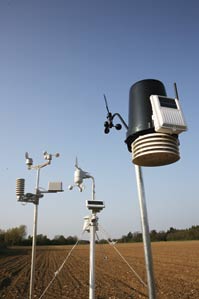 All-in-one weather stations offer a way to keep track of the weather without leaving your farm office. David Williams tried three of them to see if they were any good

Investing in a weather station doesn’t have to break the bank. We tested three units between £130 and £700, all of them offering wireless connection between the sensors and display unit. They all record rainfall, temperature, humidity, wind speed/direction and barometric pressure, as well as providing a forecast.

* The least expensive £130Weather Eye (pictured top)has a battery-powered lcd display screen with no facility for mains power. It has sensors mounted on a metal and plastic framework, and PC software is included to enable weather records to be transferred to the farm computer. 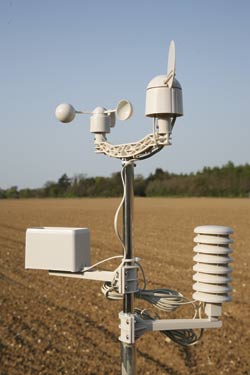 * The £350 Oregon Scientific WMR200 (pictured middle)comes with a steel mounting pole for the sensors and guy ropes for siting in a field, plus a wall mount bracket to allow the sensors to be easily fixed to a building. The sensor “suite” supports up to 10 wireless temperature and humidity sensors. A solar panel extends sensor battery life.

* The most sophisticated unit tested was the £700Davis Vantage Pro 2 (pictured bottom)which is also available in a less pricey cabled version. Extra sensors can be added both on the main array and also in other locations. The display console is large and clear and has push-button control rather than the touch-screen system of the other two units. Data transfer to a PC costs extra. A solar panel extends sensor battery life.

All the weather stations arrived in kit form and some assembly is required. All three include guidance on positioning the suite for optimum accuracy. All the sensors use batteries that will need changing, so it is important to consider future access.

Each system comes with clear assembly instructions and the easiest to assemble was the Davis which was supplied almost ready to use. Once assembled, the base consoles connect automatically to the sensors and the functions can be checked for correct operation. This is much easier to do at ground level where faults are easily rectified.

Maximum line-of-sight range between the sensors and the base unit is 100m for the Oregon Scientific, 150m for the Weather Eye and 300m for the Davis, but remember these figures will drop if there are obstacles in the way.

Because the pressure reading is affected by altitude, each unit has to be programmed with the height above sea level so that corrected barometer readings can be displayed. The Davis unit requires the latitude and longitude to be entered, enabling the device to display sunrise and sunset times as well as lunar phases.

All three provide similar information but ease of gathering of data varies. 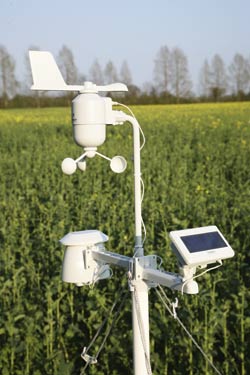 * The least expensive Weather Eye unit is easy to read but the figures are faint when viewed from some angles. The touch-screen programming can be fiddly, but the instruction manual makes operation straightforward and the display information easy to interpret.

* The Oregon Scientific screen is clear and easily read from any angle and the user can select whether to have the display backlight on constantly or just when the screen is touched. A simple menu system is used to programme the unit.

* The Davis screen is plain and very clear. Clearly labelled push-buttons select display information and for programming. The manual is essential for initial set-up and some of the more complex tasks, but the clear screen and push-buttons make operation straightforward even for inexperienced users.

We tested the weather stations against a calibrated system at an official weather station to measure accuracy. Throughout the trial the three units gave almost identical readings to each other and also to the professional unit.

One big difference between the units was the frequency with which the information was relayed from the sensors to the base unit.

* The Davis unit proved most accurate, its wind speed data, for instance, being updated almost instantly, each gust of wind showing almost immediately on the screen.

* The Oregon Scientific unit updated less frequently while the Weather Eye was the slowest.

However, all the units provided an accurate reading over a short period of time.

Linking to a PC

All three units have a data-logging capability and will store information for a period of time. However, by linking them to a pc these records can be stored and accessed easily for future use. 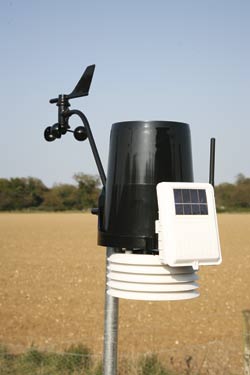 The software provided with two of the units proved easy to use and the data could be selected and displayed more clearly than on the base unit screens. The Davis base station can store huge amounts of historical information internally but the optional PC software can be used to control equipment like irrigation or heating.

Alarm modes can be set to sound when conditions exceed a set value. This can warn of conditions likely to adversely affect crops or livestock and also advise when they are favourable for grain drying.

The forecast functions proved less than perfect but did give some idea of what weather was likely. Forecasts tended to be vague and during the test period would have been inadequate for planning some farm operations. However, the official weather forecast was little better.

* At £130 + VAT, the Weather Eye provides all the key information and is surprisingly accurate and capable.

* The £350 Oregon Scientific has a clearer screen, mains power supply to the base unit and a solar panel that extends the battery life on the sensor suite. The separate and much larger rain gauge is easy to site but needs an additional battery, so requires some increased maintenance.

* The £700 Davis unit is well made and its range and the ability to add on many specialist additional sensors for specific cropping requirements is impressive. The push-button screen is easy to use and the clarity is excellent. The quick refresh rate of the information can help, for instance, when accurate and instant wind measurement is needed.

Had any experience of these or other weather stations? Give a steer to other potential buyers by posting a quick note on www.fwi.co.uk/talking tackle.