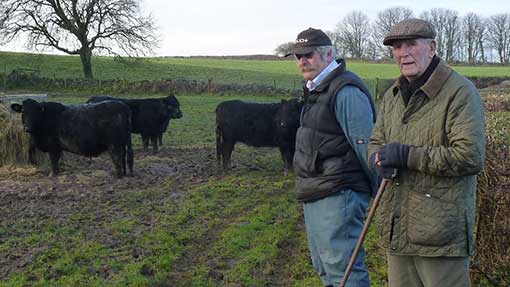 A thousand breeding ewes and 60 suckler cows on 202ha might have seemed riches to a tenant farmer on 45ha, back before the Second World War. Yet Welsh farmer and horseman Dillwyn Thomas feels his father’s generation had the better deal, as well as a more enjoyable lifestyle.

Mr Thomas, 88, still plays an active role in running the farm and has only recently retired as the Royal Welsh Show’s honorary director, horses, main ring display and commentaries. He was presented with a Silver Armada Dish by HRH Prince of Wales at last summer’s show to mark a career that has brought him into close contact with royalty and won the admiration of his peers.

He feels the better times enjoyed by his tenant farmer father are unlikely to return, but he is far too realistic and hard-headed to simply hanker after the old days. He clearly recalls the bone-chilling hard work, the German bomb that blew out the windows of his school dormitory – as well as those that fell on surrounding farms and nearby Swansea – and his secret service with the British Resistance in the hills above Port Talbot.

Mr Thomas was one of only two British Resistance survivors to join last year’s march to the Cenotaph on Remembrance Sunday, the first time that the work of the corps had been recognised.

His brief on joining the “Bomb and Dagger Crew”, at the age of just 18, had been to blow up Port Talbot in the event of a Nazi invasion and he was trained in the dark art of silent killing.

He says of those days: “I’d just got so used to keeping secrets that it didn’t even dawn on me to tell my own family. It was the perfect cover really – I didn’t get asked any awkward questions because everyone knew how important farming was to the war effort.”

Mr Thomas and his son, Tim, farm 202ha in three blocks, between Margam near Port Talbot and Bridgend, rising from 107-244m above sea level. The system is extensive, with Welsh Black cows for hardiness and ease of calving and a flock of Texel breeding ewes. They are fed home-grown haylage, with the sheep given bought-in cake when they are brought in a month before lambing in two batches, in mid-February and April.

About 150 of the best ewes are put to bought-in Texels rams and lamb in mid-February under Mr Thomas’ supervision. Their ram lambs are then turned out to tup the main flock the following autumn and are sold locally as yearlings the following year.

The cattle live out year round and calve in the spring, with most of the weaned calves sold at Abergavenny in the autumn. Twenty are kept on to finish at two years old, with barley supplementing the haylage.

Mr Thomas remains innovative and has installed two windmills – together producing 12,000kW a year – as well as solar panels. Today he breeds pure-bred border collies, rather than the stallions and point-to-pointers for which he is famous.

He introduced Texel sheep soon after the breed first came to the UK in the 1970s, liking their conformation and hardiness. He says the breed aren’t the easiest to lamb, but are good mothers and respect fences, unlike the South Wales Mountain sheep.

He says: “Farming is a lot easier in some respects, in as much as the tractor does most of the work these days, whereas when I was younger we had to use the fork to clean sheds out because there were only small doors. Now there are big barns and a tractor can clean it out in half the time with a quarter of the labour.

“My son is a good mechanic and a workaholic – 95% of the repairs that have to be done to the tractors he can do himself. Thank goodness or the bills would be tremendous. He is a good all-rounder.

“Farming for me is about livestock. Sheep, cattle and horses have been the mainstay of my farming business and, as time went on, my late wife Barbara and I turned to breeding thorough-bred racehorses and keeping the best stallions. We kept about 30 horses here until the recession.”

Mr Thomas doesn’t envy today’s generation’s computer-driven tractors, online accounts, embryo transfer and satellite navigation systems. The stress of modern farming concerns him, along with the low return from a high capital outlay and what he perceives as the emphasis on the countryside being a resource for entertainment, rather than food production.

He bought the main farm, Ty Talwyn, 60 years ago after it had been in the family as a tenanted holding for many generations. Traditionally, the rent would have been an acre of grain to the monastery, or its equivalent to Margam Estate in the 20th century, whereas today it would be between £9,000-12,000 a year, with a profit harder to achieve.

He laments, too, the burden of rules, regulations, health and safety and bureaucracy and feels it’s very difficult for youngsters to make their way in the industry. Yet he admires the enthusiasm of those who do and who make the most of opportunities that come their way.

And Mr Thomas still believes that, although his generation “had the best of it”, there is nothing better than a life on the land. 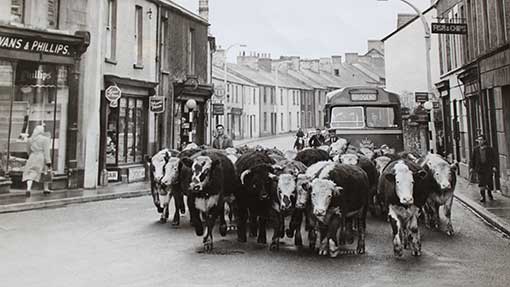