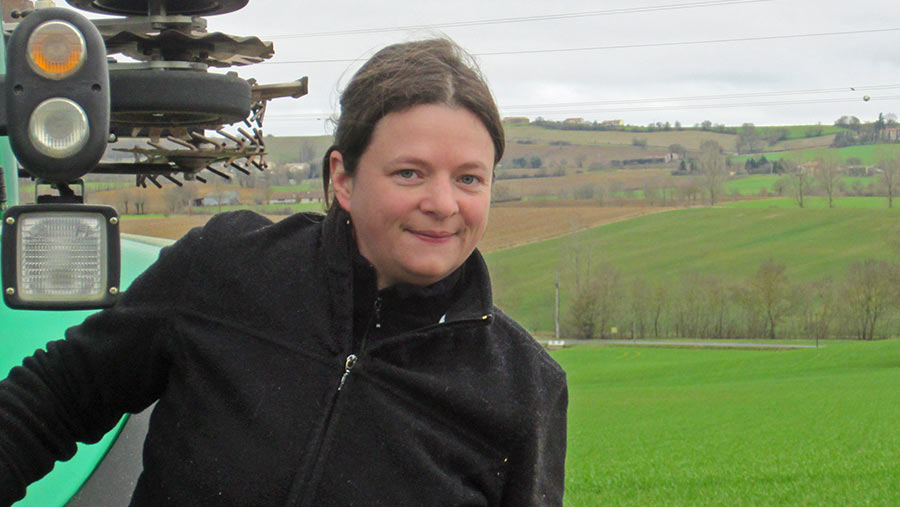 The View From Here is a Farmers Weekly series giving an insight into rural life from women around the world.

Here, Vanessa Vialettes gives us a glimpse of her life in the countryside in France and how she made the change from a job in human resources to running an organic farm on her own.

I farm in the south of France, near Albi. I work alone on my farm of 149ha. After 10 years working in human resources, I wanted to change my job to become independent.

I took over my father’s farm and bought a farm from my uncle and aunt, who were retiring.

I converted my farm to organic. I grow organic cereals, including wheat, chickpeas, safflower and buckwheat. I hope to be able to sell my crops directly to the final consumer.

Very. I run the operation on my own and I have to manage the work in the fields, marketing and the administrative part. But it is exciting to master all tasks.

What is farming and the countryside typically like in your area?

The land near me isn’t as productive as in other parts of France.

The systems are therefore varied: There is a lot of sheep farming to make the famous Roquefort cheese, many vineyards and farms growing field crops.

I think half of farmers make a proper living from their trade, while the other half don’t.

Farm debt is a big issue, and it makes us more fragile to the vagaries of world prices or climate problems.

What the best thing about living on a farm?

It is wonderful to watch nature working for us. We sow, then we look at the plants germinating, growing and developing.

It is beautiful to see that a tiny seed can become a big, robust plant.

Nature can sometimes be cruel and destroy our work in a few seconds – a violent storm just before harvest can destroy a year’s work.

What’s the single biggest challenge farmers face where you are/in your industry?

The debt. Family farming is disappearing. New farmers are often isolated on larger farms because they have to start with a larger area to make the investment pay. The farms are therefore heavily indebted and vulnerable to the global market.

New models such as organic farming, which are more profitable, are finding their place, but they remain marginal today in France.

Innovation in agriculture, trying new cultures or finding old cultures to bring them back to life.

Nature can give us more than what it gives us today. This year, I cultivated safflower – this plant is now little known, but its oil and virtues are extraordinary.

Organic agriculture is so exciting that a lifetime is not long enough to learn everything. Each day brings its share of wonder.

I’m a feminist and I can’t stand the macho behaviour of the farming environment; such as sellers of equipment and heads of small farm companies. I often get annoyed.

A woman can farm as well as a man. They aren’t intended to only do the administrative part, the meals and the household.

France is not the champion of gender equality. Women on average are paid 20% less than men. It’s more difficult for a single woman to gain the confidence of banks when she wants to become a farmer.

Unfortunately, in 2017, a woman is often expected to take care of children, the household and meals and if she expresses different interests, she is often seen in a bad light. The mentalities change very slowly.

Do you think farming is well supported by your government?

Our agriculture is supported by Europe. Without this support, the main agricultural model wouldn’t be profitable. But with the various crises (agricultural and financial) that follow one another, the aid from Europe is less important and weakens the situation of many farmers.

I am very sure of myself, and I have enough character to succeed in the agricultural world. However, I often fear for my future and I spend many sleepless nights. Being a farmer is wonderful – it’s a wonderful job, but you’re often alone and in debt.