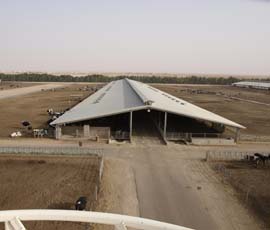 The Women’s Institute (WI) has denied being deliberately controversial over its proposal to oppose large-scale farming.

A resolution proposing that the group “abhors the practice of factory farming” is one of two to be debated at the institution’s AGM in Liverpool in June.

The resolution goes on to urge the government to “ensure planning permission is not granted for such projects”.

But the organisation has been accused of picking a controversial resolution for publicity reasons and failing to properly explain the issues surrounding large-scale production to its 207,000 members.

Rosemary Allen, who has been a WI member for almost 50 years, said the November/December issue of the institute’s magazine, WI Life, set out six resolutions for members to vote on.

“Under the headline ‘everything you need to know’ the magazine supposedly explained the mega farm resolution,” said Mrs Allen, of Cockshutt, Shropshire. “I’ve never seen such strong, emotive language from the WI. I was horrified.”

Mrs Allen, who is married to a dairy consultant, said the resolution was inaccurate and failed to properly explain what “factory farming” was, or why farmers were being forced to consider large-scale production.

“WI is sent hundreds of resolutions every year, but only six are selected to be voted on. You have to wonder why the WI chose this as one of the six – they obviously set out to be controversial.”

Following the article’s publication, members voted on which two resolutions would be debated at the AGM and eventually form the basis of WI campaigning over the coming years.

Large-scale farms and a resolution against the closure of local libraries made the final shortlist.

“The institutes will have already decided how they want their representative to vote at the AGM after they debate the resolutions,” said Mrs Allen.

“Both resolutions are usually passed, it’s very rare for one to be voted against. It could be a whitewash.”

But Ruth Bond, WI chairwoman, denied the institute had picked on mega farms to be deliberately controversial and said members had been given all the information they needed before they voted.

“Whether the article [in WI Life] was ‘everything you need to know’ or not, each county holds their own event, with experts to speak for and against each resolution. We get a balanced, educated view so they have an informed opinion before they vote.”

Mrs Bond said resolutions were not always passed at the AGM, as they need to secure a two-thirds majority. The fact the mega farms resolution had reached the AGM stage was just part of the democratic process, she added.

“We have had emotive subjects before, it just happens to be farming this time. It’s good to be controversial. The resolutions are not necessarily ‘this is what we think’, they are intended to educate.

“It’s our duty to inform and influence society and now, because of the discussion, a lot more people know about large-scale farming.”

Are you a member of the WI? What do you think of the resolution? Have your say on the FWi forums

What does the next generation of people working in agriculture think of mega farms? College Calendar writer Michael Neaverson asked students at the University of Nottingham for their views.

“Efficiencies of scale will require fewer people to manage and work the land. Progression isn’t going to happen overnight though, and the industry is going to have time to adapt. There will still be a place for traditional farms.” Tim Boor, 20, BSc Crop Science

“It’s good news for landowners and potentially management companies, but it will reduce the number of jobs available to young people. I’m worried that smaller farms might find getting contracts difficult if and when retailers favour larger businesses.” Peter Cox, 20, BSc Agriculture

“Small family farms are at risk of being put out of business by large-scale production. In an era of food insecurity, these farms will have to look to the latest technology and become more resource efficient to compete.” Tessa Patrick, 20, BSc Agriculture

“Large-scale livestock businesses are necessary to feed an ever-growing population. Proposals like the mega-dairies are in tune with animal welfare.” Liz Cresswell, 24, Veterinary Medicine and Science