A Hungarian Vizsla dog, is the “winner of winners” picture in the Farmers Weekly photography competition 2016.

The star of the photo, Ky, belonged to farmer Rose Tabberer from the Rame Peninsula in south-east Cornwall.

Ky, which is Cornish for dog, sadly passed away this summer, but Rose cherishes this photo as it shows the dog’s character – “bold and in charge of her adoring fans”.

When selecting this as the overall winner of the 2016 competition the judging panel said: “This is a heart-warming and amusing image, it’s hard to look at this photograph and not smile.

See also: The winners and highly-commended from the 2016 Photo Competition

“It’s well composed, full of colour and tells a story – in short it does everything that a strong photograph should do.” 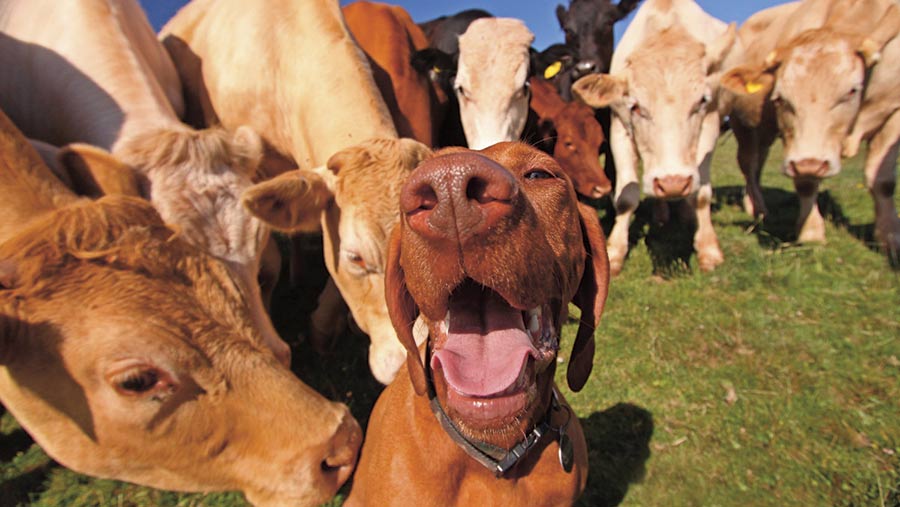 Rose, who walked away with the £250 cash prize, said she had always wanted to do something creative since her teenage years and after realising drawing and painting was not her forte, she got her hands on a friends  digital single-lens reflex (DSLR) camera.

“I knew that this was the creative form for me. So I bought a DSLR and a couple of lenses, read lots of books about photography, got out there and just took photos of anything and everything to start with to get to grips with how the camera worked and what results I liked,” Rose said.

Her main tip to other aspiring photographers is to take lots of photos and then review them as soon as possible, ideally downloaded from the camera, to see where you’re going right and wrong and what you do and don’t like. And then be ruthless about deleting those that don’t make the grade.

“I love taking photos in the British countryside, I’ve been lucky enough to travel extensively but I truly believe that Britain is the most beautiful country in the world,” says Rose.

“As a farmer, I love the structure that agriculture brings to the countryside, and photography – think tramlines, old equipment in the corner of a field, bright blocks of yellow oilseed rape against green – there is a photo waiting to be taken everywhere.”

She says pet photography is “another ball game” though and involves lots of training, lots of treats in your pocket and using a high shutter speed or continuous shooting mode.