As the old adage goes, dogs are a man’s best friend. But for a farmer, dogs are both a friend and an essential employee.

Dogs can be essential farming tools – whether it’s a Border Collie to herd sheep or a Labrador retriever as a hunting or shooting companion.

At the 150th Bucks County Show on Thursday (31 August), showgoers learned about dog behaviour in a fun “dog and duck” display, which demonstrated how even untrained dogs have a natural chase instinct.

At the show, Farmers Weekly spoke to a number of dog owners who either farm or work in the agricultural industry to find out how dogs can also be man’s best employee.

Jessica Maynard with her Cocker Spaniel Jaf and Labrador Jay

Young farmer Jessica Maynard, who works for England cricketer Alistair Cook and his wife Alice on their livestock farm in Hockliffe, Bedfordshire, says life would be terribly dull without her two dogs.

Jay is a four-year-old Labrador who is used for picking up and Jaf is a seven-year-old working Cocker Spaniel, who assists with beating on shoots.

“We take Jay out every day, basically. He stands peg with me or my dad,” explains Jessica, a 16-year-old agriculture student at Sparsholt College in Hampshire.

“Once the shoot has finished, he will go and retrieve the pheasants, bring them back to me and just stay there until there’s another bird.

“Jaf comes beating with me. He flushes the birds out. He does the opposite to what Jay does really.”

Jessica admits she has always wanted a Labrador of her own to raise from birth.

“I love being with these dogs all the time,” she says. “They make my home feel comfortable. I couldn’t live without them. They are my everything. They give me a lot of company.”

His family farms 60 suckler cows and 40ha of arable crops, as well as grass for hay and silage at Stratton Audley, near Bicester.

“Smuts keeps me company on the farm. He follows me when I’m on my quad. He keeps fit and comes around the farm.

“He’s a working dog. He keeps the rabbits down.”

What is life on farm really like with Smuts? “It’s a whole lot better. A lot more fun,” laughs Jed. “He makes it interesting and entertaining. He’s very helpful.”

Jed describes Smuts as “trustworthy and loyal” and says he is a great companion, who sits in the tractor and keeps him company. 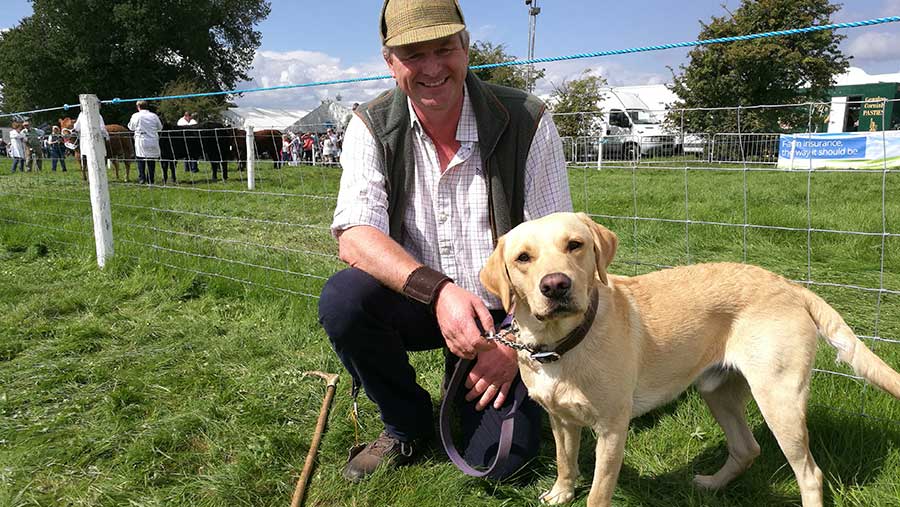 Will Needham and his Labrador gun dog Wilson

For farmer Will Needham, his Labrador gun dog Wilson doubles up as his everyday friend.

“He comes out with me most days. When I’m shooting, he’s there. I have got another 11-year-old Labrador, called Whiskey. He is taking over the big shoes from him,” says Will.

“Wilson is a good companion on the farm. Whenever I’m walking around the fields, crop walking or going around livestock, he’ll be in the back of the Land Rover. On a shoot day, he picks up.”

Will says farming can be a lonely job, but having a dog keeps him company.

“More than anything, a dog is a good companion,” he adds.

Richard Norman and his two Cockapoos Nes and Lily

Richard Norman, an agricultural and domestic fencing business owner from Buckinghamshire, says his two Cockapoos, Nes, three and Lily, five, are with him most of the time.

“They love to work, they love the training. They love people,” he says. “They both work driving pheasants.”

Lily, in particular, is quirky. She will sit at a blackberry bush and eat blackberries. “It’s very odd,” says Richard.

Brian Temple and some of his bloodhounds

Perhaps the accolade for the biggest dog lover we found at the show goes to Northamptonshire farmer Brian Temple, who hosted the dog and duck display.

However, his pack of 30 bloodhounds “rules my life”, he says.

Brian uses the bloodhounds for drag hunting, a humane sport that involves a pack of hounds hunting down a live human being.

“He runs, the hounds hunt him and then people can come out with us and ride their horses, jumping the fences. It’s hunting on horseback – it’s great fun.”

Chases take place over 15 to 20 miles and are held across many areas, including the Cotswolds.

The human runner is paid £60 and entrants each pay £60 for the day. After the costs are paid, the rest of the money is given to charity.

“We do this for a bit of fun and to raise money for good causes,” says Brian.

“We meet an awful lot of lovely people. We meet farmers from all walks of life and have a good craic with them.”

For Brian, dogs are a way of life.

“They are good friends. They are always loyal – even the ones that are in a pack,” he says. “Nobody should be without a dog.”