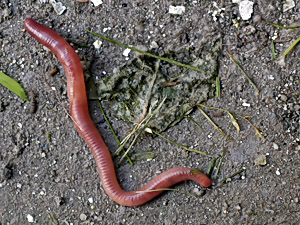 Once a year the quaint South Cheshire village of Willaston plays host to an important and prestigious sporting occasion.

People from around the UK and beyond descend on a primary school field to take part in it.

It may not have the stature of, say, the Wimbledon championships, but it means as much to its participants. It is a sport of team work, of dedication and skill – mixed in with a slice of luck. The sport, if you’re wondering, is worm charming.

The Worm Charming Championship is a battle to see how many of the animals you can charm out of an assigned 3m by 3m plot of land in a 30-minute period.

You can use a variety of ploys from twanging (the method of vibration to coax the worms up) to playing musical instruments. Even tap-dancing is occasionally employed.

The current world record holder is Tom Shufflebotham who, in 1980, secured a massive 511 worms. He, like competitors today, had to work within the 18 rules that govern the sport, which range from “no excessive ground movements” to “no liquid substances”.

Since I was a child I have always wanted to be a world champion in something, but apart from a “Most Improved Footballer” accolade when I was 11, prominent trophies have eluded me.

Signing up for this event, I couldn’t stop thinking about how winning could change my life. Maybe it could mean a guest appearance on Question of Sport, or multi-pound endorsements for worm-related products at my local pet store. Stuart Clarke, worm charmer extraordinaire – it’s got a certain ring to it!

I put such thoughts to the side however as I entered the stadium (I mean primary school fi eld) on a grey Saturday afternoon.

I picked up my worm collecting pot and made my way to my assigned spot, being careful to dodge the forks that had already been symbolically placed onto other competitors’ plots.

As a complete novice, I had already sought expert advice, which current father and daughter champions Geoff and Davina Sandberg were pleased to give me.

“You will get very tired but you just have to keep working as hard as you can right through to the end,” said Geoff. Davina added: “It’s a full sporting event, you have to prepare for it… it’s a real stamina event.”

The whole event is governed by the International Federation of Charming Worms and Allied Pastimes (IFCWAP). Presiding over the day was Chief Wormer Mike Forster, who gave me an idea of what IFCWAP also governs. “The allied pastimes are things like indoor hand-gliding and underwater ludo and ice tiddlywinks, which is a cross between curling and tiddlywinks
where the tiddles go further.”

As this was a two-person event, I enlisted the help of good friend and worm charming veteran Beth Knight. Despite my lack of experience I felt confident I was ready. Bring on the worms…

It all started, and I began to twang the ground in earnest, using my fork to entice the blighters out. Within a minute, I hear a cry of triumph from Beth – we have our first worm. Only 511 to go before I am a world record holder.

Ten minutesin and my legs start to feel tired through the physicalexertion. Although twanging was working well, I felt it was time to mix things up. Like Fred Astaire I jumped onto a piece of wood, while singing the Beach Boys’ hit Good Vibrations.

Anywhere else and this would have looked strange, but here it’s all part of the worm charming repertoire. People playing the oboe, or jumping around on a board was commonplace. If only I had a didgeridoo with me.

Twenty minutes fl ew by and with just 10 left, the end was in sight. We made a tactical substitution, replacing Beth with Sebastian Black, who might bring an extra impetus for the final few minutes. The end was accompanied by universal cheering.

We were all tired, but we had done our best. Time would only tell if it was good enough. It had definitely been a learning curve out there, as I realised how patient you must be, with sometimes minutes going by without any worms, followed by three or four at once. My impatience had also meant that we had lost a few, as pulling the worms out too early had meant they buried themselves back into the moist earth.

The worm pots were quickly transported to a cordoned off counting area to avoid any possible chances of corruption. All we could do was stand there and wait, recounting our
tales to fellow participants.

The latest results appeared on a makeshift leader-board. Competitors huddled round, looking wideeyed and hopeful.

I quickly realised that this wasn’t to be my year, as my respectable but unremarkable 74 rapidly became obsolete against the bigger scores.

Eventually Claire and Mike Gaukroger picked up the trophy with an astounding 399. Although not victorious, I felt a great sense of pleasure in taking part in an event that really brought the rural community together. It was an event that I will definitely enter again. Although I am not sure what the neighbours would think about the sight of me twanging in tne back garden!

LISTEN TO THE ACTION
Listen to Stuart’s hilarious seven-minute audio recording of all the action.