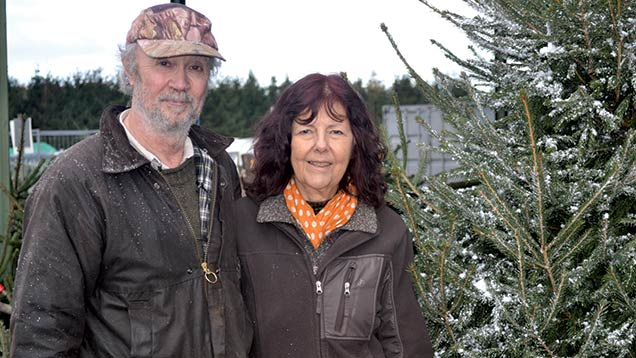 Just as Santa begins wrapping presents long before the big day, so the hard work involved in producing that aromatic centrepiece of many homes throughout the country takes dedication.

But it’s not just 12 months of meticulous care – the average 6ft Christmas tree takes between six and 10 years to grow.

The Kingswood Christmas Trees plantation in Kent has an impressive 50,000-100,000 trees at various stages of growth, keeping the team busy year-round. But the pressure’s really on in the run-up to the festive season.

“It’s certainly an incentive to do your best and produce something people are happy to have in their homes at Christmas,” says Rob Schroeder, who runs the business in Maidstone with his wife Jenny.

They typically sell their first trees in October then, during the busiest time in December, can shift 1,000 each weekend to customers visiting the shop.

Trees are picked out by hand when they’re ready and marked with a red tag, with the number selected based on quality and size. These are then cut a week to 10 days in advance of sale and stored outdoors to keep them moist.

Those sold wholesale (60%) are netted in the field and brought back to the farm buildings for transport. Those retailed in the Christmas shop (40%) are left net-free until sold. Branches from trees that do not make the grade are used to make Christmas wreaths, while the trunks are used to fuel the wood burner inside the shop.

Trends in Christmas trees, like any other fashion, go in circles, says Rob. The swing away from artificial trees in the mid-1980s meant real trees were back in vogue just at the time when his first planted trees were in their prime.

What makes a good tree?

Rob had taken over from his dad in 1979, when he was 32. “He couldn’t see a future in the trees because of his age, but I felt more optimistic,” says Rob, who scaled down the livestock and arable enterprises to allow expansion of the tree business over the next 10 years.

“The trees don’t need checking every day like the livestock did, but they can both suffer from pests and diseases.

“The harvesting period is very intense, often in bad weather, and you only have three to four weeks to get your money back,” he adds.

In the 1990s, the trend changed again – this time to a new species, the Nordmann fir, with its highly acclaimed non-drop needles. The plantation now has 20% Norway spruce and 80% Nordmann fir. “It took us a while to switch,” says Rob. “The Norway spruce takes five to six years to reach 6ft, but the Nordmann fir takes 10 years. It has a ball-and-socket root to the needle so they don’t fall out,” he adds.

For Rob and his family, however, it’s the traditional and aromatic Norway spruce that wins every year. Ironically, their daughter usually ends up decorating the family tree as Rob and Jenny are both so busy.

Like any other crop, Rob has to be vigilant for pests, with aphids and red spider being the two major concerns. These defoliate the branches by sucking out the sap causing the needles to drop off.

Weeds can also be a real threat to young trees, killing them by choking or restricting their growth by competing for nutrients and moisture.

The Norway spruce is shallow rooted and used to be sold as a rooted tree. The Nordmann fir, however, has a tap root as tall as the tree and is sold, as the majority are today, as a cut tree.

Rabbits and hares, if not properly fenced out, will eat the tops off young trees, especially in winter when food is scarce or snow covered. Deer are less of a problem, but these too will browse on the tops of the trees. Badgers, meanwhile, simply bulldoze the fencing, says Rob.

“I can’t over-emphasise the amount of labour involved. You’re out there doing something every month of the year. If you harvest 80% of what you plant, you’re doing well.”

“Trees are stolen from the outlying plantation. We patrol through the night but nothing is safe.”

Considering himself a typical farmer who has had to diversify to survive, Rob has several other enterprises, as income from the Christmas trees alone is not enough. A caravan park and caravan hire business, alongside commercial property rental and hire of some land for paintballing, all contribute equally and enable Rob to keep two full-time workers employed throughout the year.

With Rob planting between 10,000 and 15,000 trees annually, the business has come a long way since his father, Fred, branched into farm diversification by planting his first Norway spruce in 1955.

A long-standing member of the British Christmas Tree Growers Association (BCTGA), Rob meets three to five times a year with other growers throughout the UK and Ireland.

“We exchange ideas. The trade suppliers have stands and the nurseries that supply the transplants are all there,” says Rob.

The highlight of the BCTGA calendar is the Christmas tree grower of the year competition. The winning tree ends up outside number 10 Downing Street, while the runner-up tree goes inside the house. And while this accolade has so far eluded him, one day Rob says his tree will take pride of place.

“All growers strive to improve what they produce and it is a very green activity. For every tree we cut, two more are planted. They also provide a great wildlife habitat.”

As such an iconic part of the festive season, producing a quality tree is vital for Rob and his team. And providing a good service and experience for his customers is key.

Rob and his wife Jenny have worked hard to attract more retail customers, who travel from as far away as London and Dover.

From their humble beginnings selling a few trees from their car port, the business now incorporates a large shop, which Jenny runs.

Inside there is quite possibly everything you could ever want to deck the halls, plus plenty you never knew you wanted. And if you’re struggling with what to buy, there are always comfy sofas by a welcoming wood burner to take a load off and enjoy a cuppa.

“Refreshments and the grotto are free and the children get a little gift. At a time when family finances may be strained, it’s nice for something to be free and people really appreciate it,” says Jenny.

Shop stock is chosen in February by Jenny and everything is set up ready to go from September.

“For us it’s like Christmas all year round,” she adds.

Customers can choose from a range of tree sizes, from 2ft to 25ft, with prices starting from £15. Offering a service and range of trees is particularly important to Rob, who also delivers trees to schools, hotels and pubs.

He believes most people like the aroma and prestige of having a real British tree. “Plus, if you don’t have a real tree, Father Christmas won’t come!”

To those who jest about working three weeks a year, Rob replies: “You try growing them and find out how difficult it is!”

January-March Groundwork preparation and rabbit-proof fencing. Previously planted plots are stump-grinded to a depth of 15-20cm, subsoiled, chisel-ploughed and harrowed.

March-April Bought-in seedlings are transplanted at two to four years old (20-30cm tall). Trees are planted in 12m-wide beds with a central track to allow a boom sprayer through. Three acres are planted a year, with about 4,000 seedlings an acre.

November-February Trees are dormant and can be sprayed with glyphosate.

For the next three to four years, continue weed and pest control by spraying twice a year.

When a Norway spruce is four years old branches can be sheared or hooked by hand to get a good shape.

The Nordmann fir has to reach five or six years old before this process begins.

Any excessive growth of the top leader (the fairy branch!) is controlled mechanically by top-stop pliers, which cut into the bark and slow growth.

Alternatively, top-stop chemical can be rolled on to the bark of the leader.